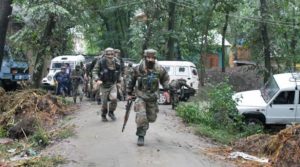 Gurez: Four Army men, two militants  including a Major have been killed in an ongoing gunbattle between government’ forces and militants at LOC near Govind nallah Gurez Sector in Bandipora North Kashmir.

“No militant bodies retrieved yet,” he said.

Srinagar based army spokesman said that Infiltration Bid was Foiled in Gurez Sector in which two militants were killed.

“In the operation, one officer and three soldiers martyred. Operation in progress,” he said.

Gunfight was going on when this report was being filed.