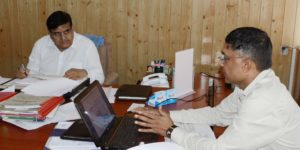 SRINAGAR: The Apex Committee of Industries and Commerce Department on Tuesday has cleared the industrial investment proposal of Rs 5300 crore in the State besides 13000 Kanals of additional land has been designated for development of new industrial estates in the State.

Speaking at the meeting, Vyas stressed on promoting balanced industrial growth leading to creation of employment opportunities for local skilled and educated youth.

For the promotion and securing the local brand particularly in Art and Craft industry, Vyas called for Brand Promotion of Handicrafts, bringing in more crafts under GI, mandatory tagging of handmade crafts with GI certification, End-to-End development of Pashmina products, diagnostic survey of Artisans, besides formation of handloom/handicraft cluster at district level.

Earlier, the Commissioner Secretary Industries gave a detailed insight about the working of I&C department as nodal agency for development of industrial sector in the State which includes registration of new units, rehabilitation of sick units, and industrial activities coordination through SICOP, SIDCO and MSME.

He also informed about the role of Industries Department as nodal point for implementation and disbursement of central and state industry incentives through JKDFC, implementation of PMEP, registration of societies and firms besides implementation of State policies and regulations.

A detailed discussion was held regarding their assets, causes of production decline, marketing and budgetary support plan besides innovative roadmaps for turning them into profit making assets.  The meeting was informed about the revenue and CAPEX budget status of these corporations.

The meeting was also informed that by the end of this year silk factory Jammu, filature units of Kashmir & Jammu (5), shoddy plant, spinning mill of Srinagar would be made functional.

Regarding the JKCL, the meeting was informed that for the first time the annual turnover is expected to touch Rs 150 crore through its enhanced production of 850 MT.

Similarly, the Advisor was informed that Handloom wool production under JK Handlooms Corporation would reach to the level of 1 lac meter per annum.

Similarly, Samba factory is expected to produce 2.65 lac meters of cotton, the meeting was informed.

From giving artisans financial support and honing their skills to training unemployed youth of the State in initiating successful business models, the meeting was informed about the role being played by the skill development centers including Craft Development Institute, Entrepreneurship Development Institutes, and Indian Institute of Carpet Technology.

Highlighting the achievements of the department, Shailendra said that exploitation of Parlanka Gypsum Mine has been started. The mine has a reserve of 10 million ton with estimated value of Rs 850 crore at current prices.