Tamsheel had left home to inquire about summer vacations, but came back in a blood soaked shroud

Body of Tamsheel Ahmad Khan, who was killed in clashes

Srinagar: Tamsheel Ahmad Khan, 15, had a cup of tea with his family and left his home on foot to inquire whether the summer vacations were announced or not.

But, he never knew he would ever spend the summer vacations at home.

Khan was killed during the clashes between the youths and government forces in Kundalan area of South Kashmir’s Shopian district in which two Leshker-e-Toiba militants were killed on Tuesday while over hundred people sustained pellet and bullet injuries.

Khan was a resident of Vehil Kachdoora of Shopian district.

“Khan was killed in a target fire,” a local of Shopian said, wishing not to be named.

After finishing the morning salt tea, the family said Khan left home while intimating his parents that he wanted to inquire from his friends whether summer vacations will be announced or not.

“Nobody knew he would return in a blood soaked shroud with thousands of people back home,” a family member said.

Recounting the day of encounter, the family members said that goverenment forces laid siege of Kundala and adjoining villages in the dead of night when everyone was asleep.

As the pre-dawn approached, the villagers saw the goverenment forces including the army on streets.

“We could hear the sounds of military trucks during the night. We had a clear idea that forces are on the streets. We could not get a wink of sleep. For the whole night we were so frightened that we did not switch on the lights,” family relative of Khan said.

A local resident, Tariq Ahmad said it was around Fajar (pre-dawn) prayers when the villagers heard the gun shots.

“It was intense. The intensity of the firing was that much that I feel I would be blown like an air balloon,” Ahmad said.

The heavy exchange of gunfire was followed by loud blasts of Improvised Explosive Devices. 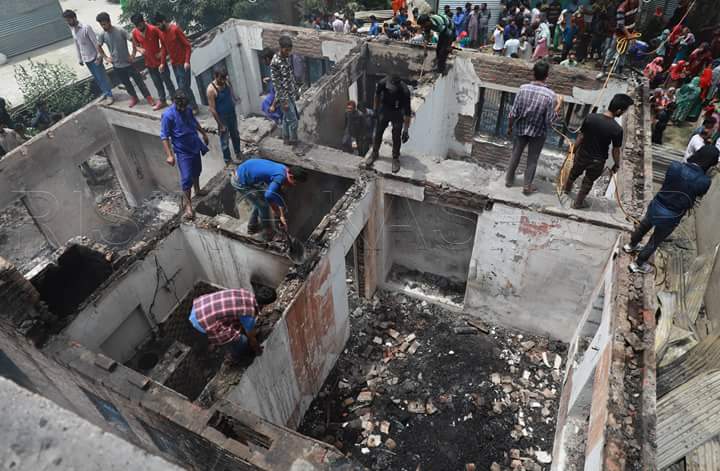 As the firing continued, the locals said youths assembled around the houses where the encounter was going on and clashed with the forces.

The youths pelted stones on government forces who retaliated by firing bullets and pellets on them.

During the clashes, eyewitnesses said, Bhat was hit with a bullet in his head.

“We hardly could get courage to ferry him to district hospital Shopian some five kilometers distance away from the spot,” Ahmad said.

He said the condition of Khan was so crititical that the hospital administration shifted him to Srinagar for the advanced treatment.

“Khan was writhing in pain. He finally gave up and breathed his last at Srinagar hospital,” Ahmad said.

Apart from the death of Khan, the clashes also over 130 civilians injured among them dozens had the bullet wounds, said the hospital authorties.

Bhat belonged to a middle class family. His father, Farooq Ahmad Khan, is a carpenter by profession and works hard to meet his daily expenses.

The family members said that Bhat was studying in 9th class in the local government school.

During the encounter, the government forces blew up the two houses which belonged to Muhammad Yoqub Parray and Muhammad Maqbool Parray.

A statement issued by the police said:

“Some civilians were injured in cross firing at the site of encounter, which were later evacuated to hospital for medical attention. One of the injured persons later succumbed to his injuries while the other injured are stated to be stable now”.

‘Police has registered a case and investigation has been initiated in the instant matter.”