Nawaz, Mayram to challenge verdict on Monday, return on Friday 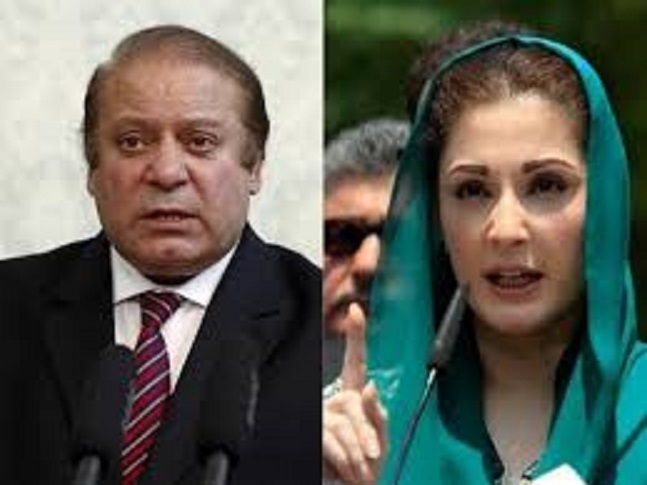 Islamabad: Former Prime Minister Nawaz Sharif and daughter Maryam are set to challenge the accountability court’s verdict against them in the Islamabad High Court on Monday, a Geo TV report said on Sunday.

All three family members, according to sources, have given their power of attorney to Khawaja Haris — Nawaz’s counsel during the over-nine-month trial in the accountability court —, who will file the appeals tomorrow.

While speaking to media in London earlier on Saturday, Maryam said she and her father would return to Pakistan on Friday — before the 10-day deadline for an appeal against the decision ends.
She said a consultation was under way over the decision and that their lawyers were looking at the matter from all legal angles.

“Due process will be implied against the court’s decision,” Maryam had said, adding: “The institutions in the UK have already told the Pakistani institutions that no illegality was carried out.”

NAB officials have said they have obtained the necessary warrants in this regard and will arrest the duo when they land.

With regards to Nawaz’s return, Pakistan Muslim League-Nawaz (PML-N) leader Hamza Shehbaz has called on workers to reach Islamabad when the PML-N supremo returns to the country.

Three NAB teams to catch Safdar, KP information minister says no one has contacted yet to nab Safdar.
As per information received by Geo News, Capt (retd) Safdar’s name was added to the blacklist, barring him from exiting Pakistan through any airport or land or sea route.

Capt (retd) Safdar’s whereabouts were unkown as of Saturday night, Geo News reported. The NAB has stationed teams to arrest Nawaz’s son-in-law and it has positioned three teams in different cities — Haripur, Abbottabad and Mansehra.

Safdar’s last known location, since the verdict was announced on Friday, was his home constituency of Mansehra from where he intended to contest the July 25 election.

His mobile phone has also reportedly been switched off.

Moreover, with regards to reports regarding NAB seeking assistance from the Khyber Pakhtunkhwa (KP) police, the KP minister of information said neither he nor his office has been contacted by anyone regarding Capt (retd) Safdar’s arrest.

The court had put Safdar’s name on the blacklist of the Interior Ministry — a watch-list to monitor persons intending to leave the country.

Prior to that, the Election Commission of Pakistan (ECP) issued directives to halt the printing of ballot papers for the NA-127 and NA-14 constituencies of Maryam and Safdar as they have been barred by the accountability court from contesting the July 25 polls. (UNI)