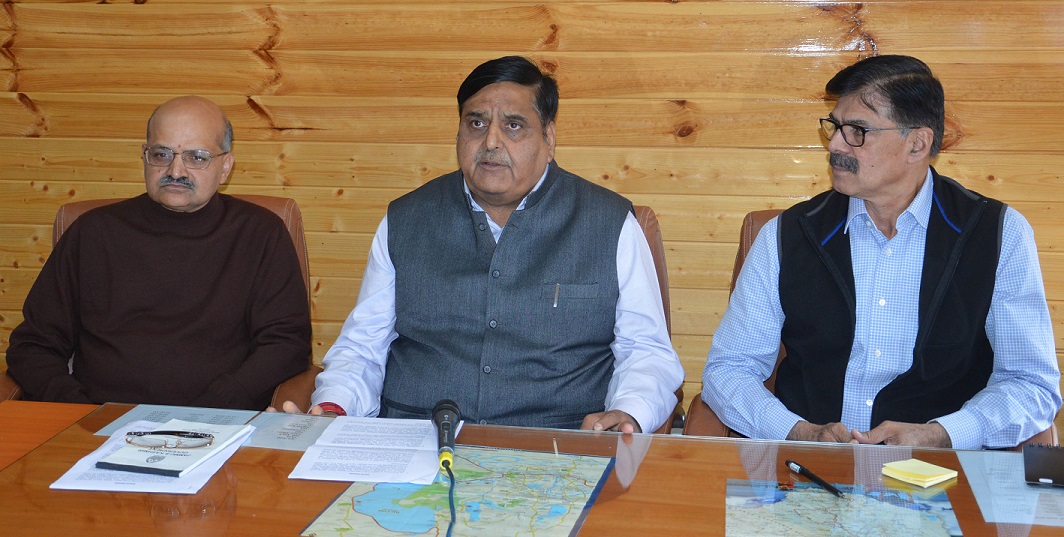 SRINAGAR: Advisor to Governor, BB Vyas today said the administration is fully geared to tackle the situation in view of the looming flood- threat in Kashmir following incessant rains and rising water levels in the rivers and Nallahs.

He said while there is no need to panic, but people should take precautions.

He was flanked by Advisor, K Vijay Kumar and Chief Secretary BVR Subrahmanyam.

He informed that 53 mm of rainfall has been recorded in three districts including Shopian and Anantnag and Srinagar.

He said the people have been warned to remain alert and be ready in case of any possibility of evacuation.

The Advisor said as the water level rose above the danger mark at Sangam in South Kashmir as well the water level continues to rise at Ram Munshi Bagh in Srinagar; government has set up round-the-clock multi-disciplinary monitoring system in various parts of the state.

“We have the reports that due the incessant rains from last couple of days, lot of damage is caused damage in Shopian and other south Kashmir areas. The administration has alerted people to remain alert but don’t panic,” he said.

“Due to the heavy rainfall, the water flow in River Jhelum has gone upto 50000 cusecs against the carrying capacity of 35000 cusecs and the water level at Ram Munshi Bagh in Srinagar till early morning today was upto 20.82,” he said.

He said that 140 NDRF and SDRF experts have been directed to remain vigilant to tackle the situation.

He informed that in Srinagar, government has created 44 shelter sheds and relief teams are now in place.

The Advisor said that the Chief Secretary has issued orders that all the essential services including supply of rations is ensured to the people.

“The next challenge that we face now is heavy water logging in urban areas. 15 heavy duty and 40 small water pumps are in place in Srinagar city and SMC has been directed to monitor the functioning of these pumps,” he said.

The Advisor said that the Amarnath Yatra has been suspended from both the routes (Baltal and Pahalgam) due to landslides at various places.

He said the pilgrimage to the holy cave will resume after the tracks are cleared and weather improves.

The Advisor informed that the three deaths have been reported from Jammu province in which one lady lost her life from falling of tree. District and divisional teams have been activated there also.

There are also reports of loss of livestock and damage to Kacha houses. He said the Revenue teams are accessing the damage caused due to the flood like situation, adding that in this course whatever relief and whatever admissible assistance is permissible shall be distributed among the affected victims.

The Advisor informed that the weather is expected to improve soon. He said the administration is keenly monitoring the situation. People living in low-lying areas have been asked to be prepared for evacuation in case of an emergency.

Speaking on the occasion, the Chief Secretary B V R Subrahmanyam said that he is personally monitoring the preparedness of the administration and is in touch with all the concerned to handle the situation effectively.

He said the situation is under control and there was only a flood alert so that the people take necessary precautions.

The Chief Secretary said the government and its entire machinery is monitoring the situation closely.

“There is no need for anybody to have any sense of apprehension or panic about the developing situation,” Subrahmanyam said.

The CS said that the people living in areas along the embankments of River Jhelum, other streams and in low lying areas have been asked to remain vigilant.