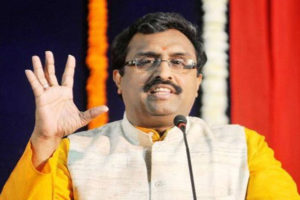 Srinagar: In what could turn out to be a major development, Bhartiya Janta Party (BJP) General Secretary, Ram Madhav said that there is definitive progress about talks with the Hurriyat.

In a free flowing interview with the Hindustan Times after the BJP pulled out support from ruling alliance with PDP, in response to a question that BJP was facing criticism, both from the people and former Chief Minister Mehbooba Mufti, that dialogue has not happened with the Hurriyat, Madhav said there has been progress in that direction.

“I don’t think, Mehbooba said that. Let us give her the due. She, in fact, criticized others for not responding to the home minister’s open appeal for talks, even with Hurriyat. Government has appointed a former DIB as interlocutor for Kashmir. He is continuing his work and will continue his work,” Madhav said, who was BJP’s focal man in cobbling alliance with the PDP to form the government in Jammu and Kashmir.

“I can tell you that there was some definite progress about talks with Hurriyats. Unfortunately, things suddenly deteriorated and Shujaat’s killing happened. I think there will be some stalemate for some time”.

Soon after Delhi announced halt in security operations for the month of Ramzaan, home minister Rajnath Singh also offered dialogue with the Hurriyat.

In response, the Joint Resistance Leadership (JRL), said that they were ready to join the process provided Government of India makes is stand clear respect to dialogue as it was too vague.

In response to another question whether BJP has strengthened the resistance leaders and weakened pro-Indian parties like PDP, Madhav said;

“I do not agree with the analysis that we have straightened the separatists. We wanted governor rule to ensure that the campaign against terrorist continue with further vigour”.

“We had planned a four pronged approach for Kashmir. One, neutralise the terrorist to the last man. Two, tackle over ground network of terrorists through legal means. Three, approach all stakeholder through dialouge. Four, work for the development of state. All four dimensions are important. We would want the present administration and the governor to pursue. There is no way that separatists or terrorists will succeed in the Kashmir valley”

BJP General Secretary said that the government has never closed the option of talks.

“Government is open to talking to all the sections. I don’t think that position will change,” he said.

Madhav also defended the “unilateral Ramzaan ceasefire” saying it was a goodwill gesture by the government.

“We did it out of strength not out of weakness. It is another thing that the opportunity was lost. It was not ceased by the other side – the separatist elements, the terrorists and the political establishment in the state,” he told The Hindustan Times.

Asked how will BJP absolve itself of responsibilities about the worsening law and order situation when it was part of the government?

“This is a very silly question. If you take that as a technical question, then I will say home ministry is not with me. It a technical answer. Governments are essentially run by the head of the government. The head of the government was also holding the responsibility of security and in any case, and as the head of the unified command, she had her issues. But, Mehbooba has allowed security forces to operate, that is why in last three years we have been able to neutralise close to 600 terrorists. The PDP started taking a political stance of late, probably for political reasons. The BJP cant not be supporting a party for a soft approach that means raising issue of Pakistan again and again, or talking about muscular approach, getting Shujaat killed, getting army soldier, policemen and civilians killed. We felt that, probably because of the local political considerations, our partner has started taking a slightly different stance. That is when we felt it is not tenable. The mismatch is growing”.

Whether the tenure of J&K governor, NN Vohra, will be extended or not, the BJP leader said the decision will be taken by the home ministry and the Prime minister.