‘Tremendously saddened with the assassination of Shujaat Bukhari’ 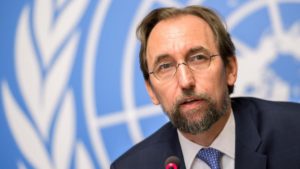 “I encourage the Council to consider establishing a Commission of Inquiry for a more comprehensive investigation of the human rights situation in Kashmir, and reiterate my calls for access,” Hussein said in an opening statement while giving global update of human rights concerns at 38th session of the Human Rights Council.

Hussein also said he was saddened by the assassination of Journalist Shujaat Bukhari.

“I am tremendously saddened by the assassination last week of Shujaat Bukhari, a courageous human rights defender actively working for peace, including through his participation in the Track Two diplomacy seeking to help both India and Pakistan put an end to the violence,” he said.

Bukhari was brutally murdered along with his two police guard in Srinagar’s Press Colony last Friday.

The UN commissioner also appealed the UN rights commission “to do more, to speak louder and work harder for the common purpose and for universal human rights law, to better our chances for a global peace”.