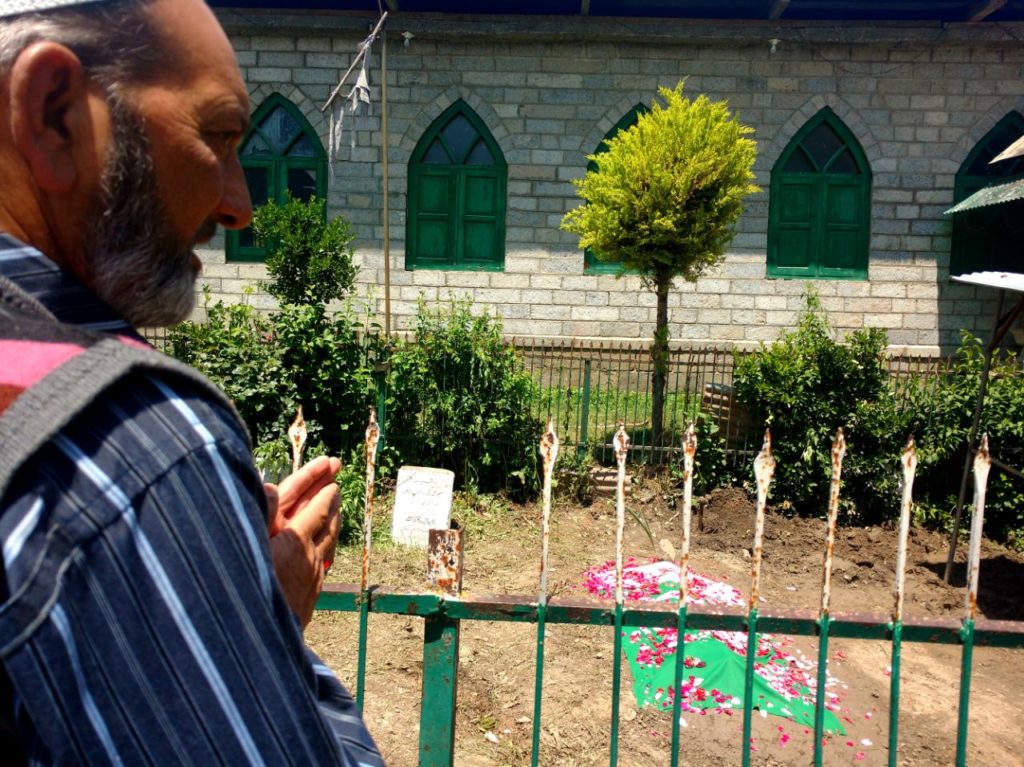 Naseer Ganaie writes about a man who goes through the painful and torturous journey of searching for his disappeared brother who was picked up from his home by the Ikhwan,the Indian army’s rogue militia.  One day, the man realizes he had spent most of his precious life looking for his brother. Finally, he decides to close the case and shows his mother, sister, and family members the fresh grave of an unidentified man, passing it off as that of his own brother…….

I like to meet new people. I like to listen to their stories. In fact, these little stories make up our lives. We are stories unto ourselves.

There are times when you just stumble upon people. Meeting them changes your entire outlook and the way you approach life.

I remember one such meeting when I came across Bilal (name changed) in a clinic run by my psychiatrist friend. That day I acted like a mere observer, one who only watched things, and who has to remain silent, neutral, and unmoved.

Bilal sported a greyish cropped beard. He was wearing a chequered shirt hung over a bony frame, and baggy trousers. He looked disturbed, as if lost in deep thought. He would talk in breaks. His appearance suggested that he was suffering from an inexplicable pain. He looked older than his actual age.

As he sat down on the chair facing my friend, the chair creaked. He did not introduce himself to the doctor.

“You remember Gulzar…. I am his elder brother,” Bilal told the doctor, my psychiatrist friend, right after he had darted into his clinic.

“Give me your arm. Let me check your blood pressure,” the doctor responded.

There are times when you just stumble upon people. Meeting them changes your entire outlook and the way you approach life.

Bilal felt embarrassed. Why did the doctor not respond to my introduction? He would have thought.

The patient repeated, loudly this time, “Doctor saheb, I am Gulzar’s brother.”

My doctor friend now looked at him closely. He was trying to recollect the face of Gulzar. Who was he?

A moment had passed when the doctor figured it out about Gulzar. He smiled and inquired from Bilal about him.

“Where is Gulzar. What is he doing these days?” the doctor asked him while adjusting a stethoscope on his right arm to check his blood pressure.

The response from the doctor comforted him. He settled on the chair with greater ease.

“You don’t know anything about Gulzar? He was your classmate!” Bilal abruptly said to the doctor.

The patient continued talking. He recalled how during the nineties Gulzar had crossed the Line of Control- the heavily militarized border dividing Kashmir into India and Pakistan, and like hundreds other Kashmiris had got arms training to end India’s rule in the region.

“We thought he (Gulzar) would become a doctor. But then you know destiny had different plans for him!” he told the doctor and took a deep sigh.

Bilal seemed in a hurry. He wanted to tell his tale, and it seemed he finally got someone to listen.

“He came back, but the Ikhwan (Indian army sponsored militia) picked him up in South Kashmir. They released him after brutal torture. It was difficult for him to move around afterwards. He would then stay in the village and never go anywhere.”

By now, the doctor also wanted to know everything about Gulzar. He did not interrupt Bilal once.

“Then, one evening, some Ikhwanis came to our house, and they whisked away Gulzar like eagles pounce upon scurrying rats on the ground. We thought they would release him. We waited. Waited and waited. But, doctor Sahab…. he did not return.”

The doctor looked anxious now. He held his breath and then released it making a hush sound. He put the stethoscope aside and started scribbling on a prescription pad.

The doctor knew about Gulzar. He knew Gulzar was one of brightest students at his school.

In fact, the doctor and Gulzar had appeared together in a matriculation exam in 1987. Afterwards, he had never heard about Gulzar.

It had been decades since the doctor had seen Bilal, though he would have preferred not to have met him at his clinic. He remembered him as a handsome young man, always brimming with energy. No. Not like this, as he was now before him- a broken man.

The patient continued to narrate the disappearance of his brother, Gulzar. He told the doctor how his absence from his house turned into days, then weeks, and weeks into months and months into years.

“But my search for Gulzar did not stop,” he asserted. “Every day I would return home after searching, and my mother and family members would inquire about Gulzar. I would do everything to pacify them, especially my distraught and broken mother”.

As he continued with the search for his brother, one day Gulzar heard that a bullet ridden body was lying on the roadside in Seer village of Islamabad district.

“I thought it would be the body of my brother. I rushed to Seer. But it was not Gulzar’s body. It was somebody else’s,” the patient said.

The frantic search to locate his brother, Gulzar, had made the patient travel across Kashmir, especially South Kashmir. He told the doctor whenever he would find out about “bullet-riddled” bodies dumped on the roadside by the army or the Ikhwan, or lying in a deserted orchard, or in some boulder ridden ravines in mountainous areas, he would go there, thinking one day it would be his disappeared brother.

“I thought it would be the body of my brother. I rushed to Seer. But it was not Gulzar’s body. It was somebody else’s,” the patient said.

I noticed that the patient did not explain why he was so sure his brother, Gulzar, had ended up dying with bullets and dumped somewhere along the road side. Perhaps it was because  he was picked up by the Ikhwan- often described as “modern day Mongols,” who mostly resorted to slaughtering, plundering and arson to douse the fires of freedom.

“It had become my habit to visit places where it was reported that someone had died after being hit by bullets. I got used to it, Doctor Saheb,” the patient told the doctor.

He paused. Then he continued…

“One day I was really tired. I asked my daughter for a glass of water. When she came with the glass, I got the shock of my life. I intently looked at my daughter. She was no longer a kid. She had grown into a marriageable age. It then dawned on me that it had been years since I started my journey to search for my brother and to bring him back home. I could not believe it. I felt broken and defeated.”

The following day after much thought, the patient told the doctor returned to Seer village again. He said he now wanted to put an end to the story of the disappearance which had become an unending journey of pain and torture for him and his family members

“When I came back that evening, I told my mother, my younger brother and my father that Gulzar has been buried in Seer. I told them that I identified his bullet ridden body yesterday when villagers were burying it,” he told the doctor in a broken voice.

“To make them believe that Gulzar had really died, I took my mother, sister and other relatives to Seer and showed them the newly plastered unidentified grave.

‘This is Gulzar’s grave,” I told them.

This was followed by the religious ritual of mourning for four days.

On the fifth day, the patient told the doctor, he started attending to the affairs of his family which had escaped his mind because of his preoccupation with the search for his disappeared brother…

“When I came back that evening, I told my mother, my younger brother and my father that Gulzar has been buried in Seer. I told them that I identified his bullet ridden body yesterday when villagers were burying it,” he told the doctor in a broken voice.

He said he realized he had to marry off his daughter. He realized his mother had now turned diabetic, his younger brother had abandoned his education and was working as a day labourer, and his father had a heart-aliment. For all these years, he said, he didn’t do anything except search for his brother among unidentified bodies.

“I had forgotten my whole existence while searching for my brother Gulzar,” he told doctor.

“Seven years have gone by since I passed off someone else’s grave as my brother’s. It kills me. I don’t know whether I did a good thing by closing the case of my brother. That time I had no other alternative.”

“Since then I have been feeling guilty. I feel really depressed. I want to sleep. Give me some tablets, which can bring me some relief, even if it is just for some hours. I have not slept for a long time. The closure of my brother’s case always haunts me. Help me, doctor,” Bilal begged.

Then the patient broke down. He cried for a long time….

The doctor consoled him and looked at the scores of prescriptions he had handed him. He provided him some medicine and advised him to come back for another appointment.

A few months later, I went again to the clinic of my doctor friend. I asked him what happened to the patient.