‘Will investigate the violence on the Israeli border with Gaza’-UNHRC 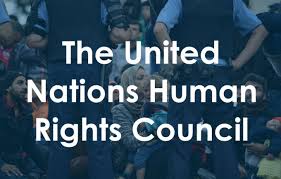 The draft text called for the Council to “investigate all alleged violations and abuses of international humanitarian law and international human rights law” in the Occupied Palestinian Territory and particularly the occupied Gaza Strip, since 30 March; the date when demonstrations along the border with Israel began, dubbed the Great March of Return.

The resolution was adopted by 29 votes in favour, with two against and 14 abstentions.

The development follows a request on Tuesday by Palestine and the Arab Group of States.

A day earlier, 60 demonstrators in Gaza were killed by Israeli forces, marking the highest one-day death toll in the territory since the 2014 hostilities. According to UN human rights chief, Zeid Ra’ad Al Hussein, who addressed the council, 87 Palestinians have been killed during the protests, including 12 children, and more than 12,000 injured; 3,500 of them by live ammunition fire.

“Palestinians have exactly the same human rights as Israelis do. They have the same rights to live safely in their homes, in freedom, with adequate and essential services and opportunities” said the High Commissioner for Human Rights.

“And of this essential core of entitlements due to every human being, they are systematically deprived”, he continued, adding: “They are, in essence, caged in a toxic slum from birth to death; deprived of dignity; de-humanised by the Israeli authorities to such a point it appears officials do not even consider that these men and women have a right, as well as every reason, to protest.”

But this did not justify the use of lethal force and may be a breach of international law, he added.

Israel responded to the special session at the Human Rights Council saying that convening the meeting was evidence of its politically-motivated “anti-Israeli obsession”.

Ambassador Aviva Raz Shechter, Permanent Representative of Israel to the UN, said that the militant group Hamas, which runs the Gaza Strip, and the Palestinian Authority in the occupied West Bank, had incited people to violence, by placing “as many civilians as possible – including women, children and journalists – in the line of fire”.