Telling tales of mental health in Kashmir through paintings 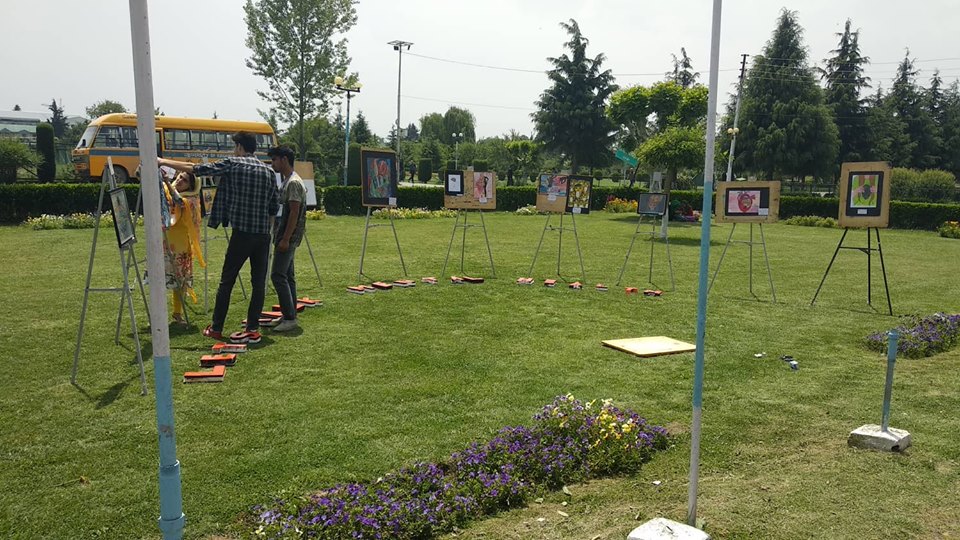 In a campaign to raise awareness about mental health issues in the conflict marred state, a group of youngsters recently held an event at Gandhi Bhawan of Kashmir University.

Outside the venue, a series of paintings were put on display by the organizers. People showed great interest in the paintings which were themed around mental health illnesses.

Among the crowd of admirers and critics, was 52 -year-old Aijaz Ahmad of Srinagar who showed keen interest in the paintings.  After he finished analyzing the paintings, he confined himself to a corner in the auditorium.

Ahmad lives in a two storey house on the outskirts of Srinagar. Inside his house, the air smells of paint.  The walls of Ahmad’s own room are sprinkled with colours, and it is filled with paints, brushes, paintings, and canvases of half-made paintings.

Ahmad says that his home, a traditional Kashmiri house, was built the “same way he draws pictures on a canvas.”

Whenever Ahmad has an urge to draw, he briefly applies some pain to the canvas but then he instantly drops the paintbrush. Distraught, he leaves his room, goes to the veranda, and lights up a cigarette.

“This has been my routine for the past few months. I am not able to concentrate anymore. I have become depressed, and am on anti-psychotic drugs,” Ahmad said when I visited him.

Ever since the death of Burhani Wani in 2016, Ahmad has been unable to draw.

“I wanted to give vent to my feelings but could not because of fear of the government. I wanted to show to the world the sufferings of people through my work but I could not,” Ahmad told me.

“You can call me a coward, but only I know what I went through in 2010 when I landed up in a police station for drawing pictures that had offended the government,” Ahmad said.

In the summer of 2010, Ahmad, like thousands of other Kashmiris, had expressed his protest against the killings that took place that year, except that his means of protest had been his painting.

For that, Ahmad spent a week in a police station. “It was a series of paintings depicting the pain of Kashmir and condemning the atrocities of the government. Hence I landed in the police station,” Ahmad said.

After that, Ahmad stopped drawing anything that he felt the government would object to.

However, the recent spate of violence and killings of innocent people made him again feel a sense of duty, and he tried to start painting the grim picture of Kashmir again.

“There was a voice trying to push me to draw, but then there was another, saner voice, continuously reminding me of the 2010 arrest. That episode had a serious impact on my family. I did not want them to suffer like they did in 2010,” Ahmad said.

He said he was warned by the police not to indulge in “anti-national” activities again; else he would have to face “dire consequences.”

“I was threatened to not draw anything that is anti-India or anti-government,” Ahmad recalled. With his own and the safety of his family at stake, Ahmad had decided not to share his work with anyone.

“In the best interest of myself and my family, I decided to quit drawing things that would not be liked by the authorities. And after a while, I stopped painting altogether. You can say I was afraid, but you know how it is in Kashmir: they can kill anyone and get away with murder,” Ahmad said.

Dr Arif Maghribhi Khan, who has been treating Aijaz Ahmad in a community psychiatric counselling centre, said that his patient is caught between his conscience and his passion. He said that Ahmad first visited him in August 2016.

“He told me of his condition and asked my opinion. I told him to be on the safe side. He controlled his urge and gave up on his passion,” Dr Khan said.

Dr Khan recalled that during their first meeting Ahmad had complained of lack of sleep and panic attacks.

“He had problems sleeping as a result of over-thinking, and the panic attacks were due to fear. The inability to decide how he should act led to excessive anxiety,” Dr Khan said.

Ahmad’s condition is much better now, Dr Khan said. “He is responding well, but you never know with depressed patients; they can relapse at any time. It could happen with Aijaz if he continues to suppress his passion.”

With the recent increase in violence, Ahmad has in fact grown more depressed.

“Everything looks gloomy to me now. For the past six months, I have not been able to sleep properly. My health has been affected, and my conscience is cursing me,” Ahmad said.

“More than anything else I am concerned about my young children, who have been distressed due to my poor health. I am always lost in thoughts, thinking of their future which seems bleak now.”

Ahmad blames the government for his troubles. “Going by what the Mehbooba Mufti government has been doing, there was no doubt in my mind that they would have harmed me. I blame the Indian puppets in Kashmir for my depression,” he said, adding that he had no “hopes of any justice in this world.”

“May nobody suffer the way I have. People may judge me and say that I should have been brave. But believe me, depression takes over everything. It has killed the artist in me. May God punish those who have done this to me,” he said.

After he is done smoking and re-enters his room, Ahmad looks at an incomplete painting and starts to cry. “I have forgotten how to paint. I have forsaken my passion. May they rot in hell for ruining my life,” he says with moist eyes