Governor briefs PM about Shrine Board initiatives for facilitation of pilgrims 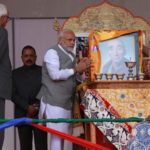 The first is the Tarakote Marg between Katra and Adhkuwari for providing convenience to on-foot pilgrims. The other project is the Siar Dabri-Bhawan Material Ropeway.

Both of these projects were inaugurated at a function held at General Zorawar Singh Auditorium at Jammu University today.

Governor expressed his gratitude to the Prime Minister for graciously agreeing to inaugurate two important infrastructure development projects which have been implemented by Shri Mata Vaishno Devi Shrine Board.

Recalling that two years ago, in April 2016, Prime Minister had inaugurated Shri Mata Vaisho Devi Narayana Superspeciality Hospital, Kakryal and the Shrine Board’s Sports Complex, Katra, Governor informed that in the past two years the Hospital has provided medical care to over 2 lakh patients and free treatment, valuing Rs 37 crore, to the poor and needy.

Earlier, Governor Vohra gave a brief description of the two projects whose pictures were shown on the screen. Tarakote Marg is a 7.5 km long ramp style track which connects Banganga to Adhkuwari.

This track, costing over Rs. 80 crore, has been constructed for pilgrims who wish to walk to the Shrine. He said that the opening of this Marg shall very significantly decongest the existing Banganga – Adhkuwari track on which mules and ponies also ply.

Tarakote Marg provides well designed facilities for the comfort and convenience of the pilgrims. The Shrine Board has also constructed a 1.5 km Link Road to connect the existing Banganga – Adhkuwari track to the new Tarakote Marg.

As regards the second project, Governor informed that the operation of the Material Ropeway will enable transportation of construction and varied other materials from Siar Dabri to the Shrine.

This Ropeway, costing about Rs. 12 crore, will enable the movement of 5000 kg of materials per hour to the Shrine and this shall very significantly decongest the existing track on which goods and materials are presently being transported in carts and on mules.

Governor informed that the third project, which will become operational early next month, is the Rs 65 crore Passenger Ropeway which will transport 800 pilgrims per hour from the Shrine to the Bhairon Temple.

He noted that the one way journey on foot to Bhairon Temple, which presently takes about an hour, will be covered in less than three minutes. He said that the Board has decided to charge a highly subsidized to and fro ticket of Rs. 100 to enable the largest possible number of pilgrims to avail this facility.

Governor observed that for the first time, the Shrine Board has got made a Master Plan of the Shrine and its adjoining areas and, in the past several years, the Board have been implementing a continuing series of planned projects for strengthening the infrastructure and progressively enhancing facilities to be provided to the pilgrims.

Besides constructing a new, airy and well lit Tunnel through which pilgrims move to the sanctum sanctorum; enlarging the area for the Atka Arti, to nearly three times its earlier size; constructing a modern complex around the Adhkuwari Temple and adding several newBhavans near the Shrine, at Adhkuwari, Katra, and Jammu, for providing increased accommodation to the pilgrims, they have also constructed a Spiritual Growth Centre, a modern Gurukul and a College of Nursing.

He further added that the University set up by the Shrine Board, now in its fourteenth year, has 1600 resident students who hail from 23 States. The Engineering college of this University has been recently graded as being among the top 100 Engineering Colleges in the country.

Governor noted that besides devoting continuing high priority to enlarging facilities for promoting education and health facilities in the region the Board is devoting very special attention to ensuring effective cleanliness and sanitation in the entire pilgrimage area.

The Board has established the required number of Sewage Treatment Plants; modernized the existing toilets and constructed new toilets for men and women; established a Biogas Plant to utilize the mule dung which is collected from the tracks; and installed a number of Ultra Filtration based water kiosks all along the tracks to provide hundred percent clean water to the pilgrims.

Besides fencing over 50 km of the Shrine land boundary, Governor informed that they are implementing a major project for stabilizing the mountain slopes to ensure against rolling stones which have been causing serious injuries among the pilgrims.

Governor informed that an Audio System plays bhajans and soft music round the clock along the entire length of the track to the Shrine and a modern Nursery has been set up which supplies several lakh plants every year for greening the area along the tracks and in the surrounding hills.

He said that they were in the process of rebuilding the Durga Bhavan to provide accommodation for about 4000 pilgrims. After the completion of this project, the Board shall achieve the goal of ensuring that 80% of the entire accommodation near the Shrine is in the “free of charge” category.

The Board is providing educational scholarships to the children of Baridar families and financial assistance for the marriages of their daughters.

They have also promoted the establishment of women’s Self-help Groups which manufacture Prasad and other materials which are purchased by the Shrine.

He observed that on the occasion of the Silver Jubilee celebrations of the Shrine Board, the Board deposited Rs 1 lakh each in the names of 156 girls who were born during 2012. Besides,  they were also providing Rs. 500 per month to the parents of each girl for her nourishment and early education.

Governor informed that the Shrine Board has recently taken another major decision to launch the Shri Mata Vaishno Devi Kanjak Samriddhi Yojana for promoting the welfare of girl children in nineteen remote villages in the Bhomag area.

Under this Yojana they were providing Rs 1000 per month for fourteen years to girl children in the 0-5 year age group. The maturity amount, after the girls achieve the age of 21 years, can be utilized for their higher education and marriages.

On the occasion Governor thanked every member of the Shrine Board, each of whom has made extremely valuable contribution towards the Board’s functioning.