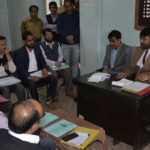 This was revealed during a review meeting of the corporation by the Vice Chairman Er. Nazir Ahmad Yatoo.

The meeting was attended by Managing Director JK Cements, FA&CAO, DGM’s and other Heads of marketing &Sales, IT and other wings.

The Vice Chairman has apprised that the company achieved highest ever cement sales of 1, 43,837 MTs during the year with a sales value of Rs. 114 crores.

As compared to the previous financial year, the corporation earned Rs 22 crore more than the year 2017-18.  The above sales targets are 25000 MTs of cement sales; above what was achieved during the year 2016-17.

The Vice Chairman took the sectional review/feedback from the officials and was apprised that the previous year 2017-18 was excellent in terms of clinker/cement production and the losses during the said year shall be negligible comparing with previous years and was added that the liabilities of the company have also been liquidated to a larger extent.

The meeting informed the V.C about the present financial crisis in the company due to nonpayment of advances by engineering departments and the amount of money that remains withheld with the government departments.

It was given out that an amount to the tune of 18 to 20 crores remains withheld with government department which has been termed as the sole reason behind current financial crisis in the corporation.

The meeting deliberated upon the negative impact of civil accounting in engineering departments which has closed doors for advance booking as has been in practice in last 30 years.

A draft proposal was also prepared in the meeting to be submitted to the government for overall revival of the company.

It was also stated that the present state of production and support from government will help in releasing all monetary benefits to employees like pending CP fund, updating of sixth pay commission arrears and release of 39 percent dearness allowance.