Srinagar: Kashmiri Diaspora on Sunday organized a protest rally against the recent civilian killings in Kulgam and “human rights violations” in Kashmir at California in United States.

“The rally started on Santa Monica Boulevard and participants marched towards Santa Monica Pier – which has a large audience, as it is a busy tourist attraction,” the community said in a press release.

The community in a press release said that during the rally, “Hum Kya Chahtey Azadi” and “India- Stop Human Rights Violations in Kashmir” slogans echoed the streets. The participants distributed several articles and documents among the passerby – which included Americans and Europeans.

“The articles and documents that were distributed stated facts about India’s Human Rights Violations in Kashmir. The purpose of the rally was to highlight the continued atrocities and the recent spree of civilian killings, including the Kulgam incident in which several civilians, including a ten-year-old boy, were killed when army and police left behind explosives after a gunfight,” said the press release. 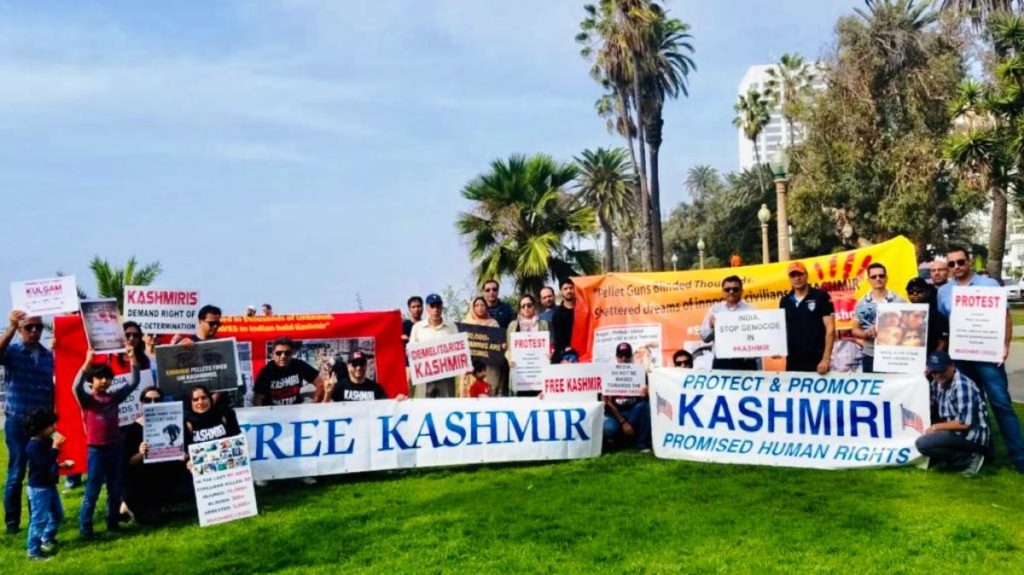 Nadeem Reshi, a non- resident Kashmiri American according to the statement said: “we took out a peaceful protest rally to condemn the fresh spree of killings and frequent cordon and search operations by Indian forces in Kashmir.”

“Kashmir has witnessed numerous nocturnal raids by the Indian soldiers, which is forcing people to remain wide-awake during nights,” he added.

The statement quoted Wajahat Dedmari, a Kashmiri American who participated in the rally said, “the unabated killing of Kashmiris by the Indian army is still going on.

In the last 30 years, we have lost about 120,000 people to Indian bullets and hundreds of our mothers, sisters, and daughters have been raped.”

“It is our duty to inform the World about these gross Human Rights Violations in Kashmir and that is why we organized this rally. We will continue our effort in highlighting these atrocities and will organize several events in near future,” he added.

Majid Butt, another Kashmiri American who participated in the protest said “the word Azadi is more than just a slogan for us Kashmiris. Slogans were raised to show solidarity with our people back home and against the continued Human Rights Violations in Kashmir.”

“Even though we are thousands of miles away from Kashmir, but we can never forget the human rights violations, atrocities, oppression, and abuse of rights on our people in Indian occupied Kashmir,” he added

“In addition to the Los Angeles rally, the Kashmiri diaspora and their sympathizers all around the United States and other parts of the World organized a Candlelight Vigil to show solidarity with the people in Kashmir and against the recent killings of civilians in Kulgam. On social media, several people uploaded their images with candles and placards depicting the Indian atrocities in in Kashmir, which was part of the awareness campaign,” the community said in a press release.