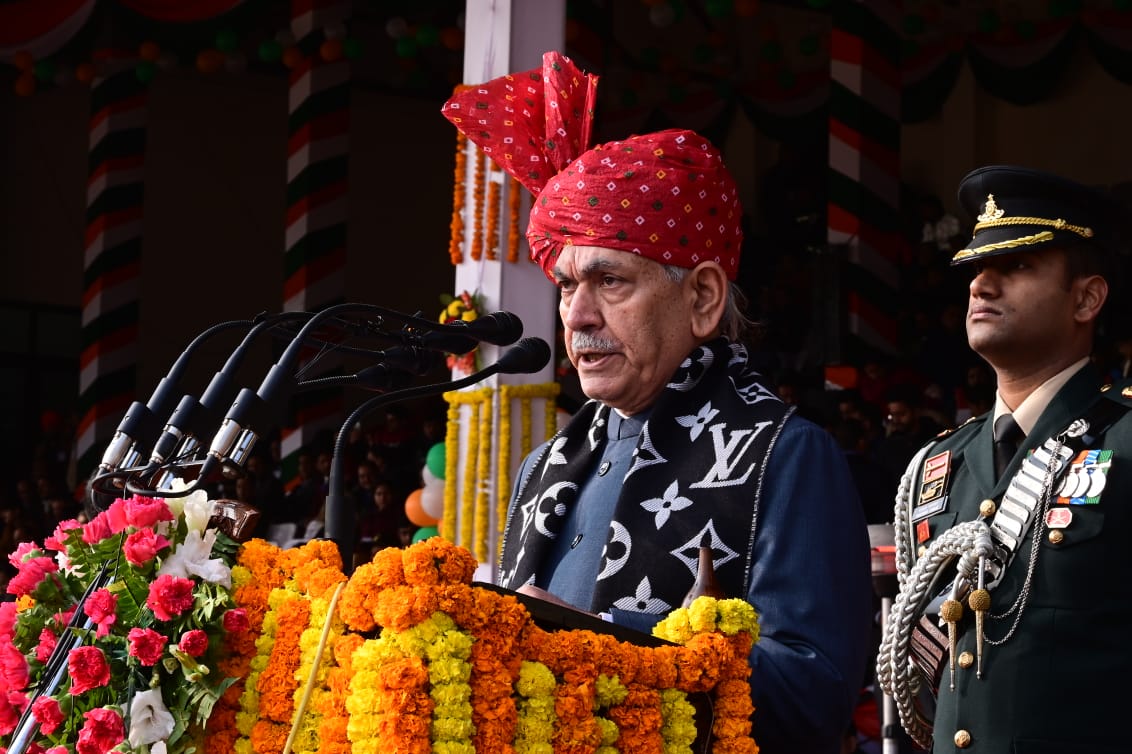 Addressing the Republic Day gathering at Moulana Azad Stadium Jammu, LG Sinha, said that the morale of security forces is high in J&K and all efforts to destabilize the peace is being given a befitting reply.

“Sustained efforts of our security agencies have resulted in a marked decrease in terrorist incidents in Jammu and Kashmir. The security grid has been strengthened and anti-terror operations have been intensified through direct attacks on the ecosystem that supports and finances terror,” he said during address.

Last year, 180 terrorists were neutralized, or there has been a corresponding reduction of 55% in civilian killings and 58% in the martyrdom of security forces,” the LG said adding, “Befitting reply is being given to narco-terrorists and seizures and arrests in Narco-terror cases have increased”.

“Security agencies are busy in the last assault on the terror, its ecosystem and its supporters to ensure everlasting peace in the UT,” Sinha said.

The LG said that the administration and the Centre has taken a series of steps for the welfare of security agencies operating in J&K.

Lieutenant Governor Manoj Sinha further said that upcoming G-20 meeting in Jammu and Kashmir is a “message to the enemies of humanity” and urged people of the Union territory to come forward and make it an “inclusive” event.

“The G-20 meeting being held in Jammu and Kashmir in May this year is a message to the enemies of humanity who were attacking the interests of our citizens through cowardly acts of terrorism for decades,” Sinha said.

He said that Jammu and Kashmir, which is an integral part of India, is the “life blood” of the country. Sinha said it is the guiding lamp of the civilization and “eternal sound of our social consciousness”.

“Jammu and Kashmir today stands tall with self-confidence, encompassing the great heritage and cultural values of the world’s largest republic. Today, J&K is marching forward on the path to progress,” he said.

“I urge every section of the society to come forward and make the G-20 an inclusive event,” the LG said.

He said that Jammu and Kashmir is not just a geographical entity but a vibrant and radiant ecosystem, where different faiths are the guiding force of inclusive culture.

“Jammu and Kashmir is a rhythmic dialogue of social, cultural values, plurality and tolerance. It is the aura of self-confident India. Harmukh, Amarnath, Pir Panjal and Trikuta Hills are the highest peaks of our spiritual heritage.

“The waves of Jhelum, Chenab and Tawi rivers reflect the essence of our intellectual and spiritual experiences. Since times immemorial the spiritual energy and blessings of Mata Vaishno Devi, Sudh Mahadev, Budha Amarnath have guided our society,” he said.

Sinha said that for decades, the development and aspirations of common people were held hostage by “exploitative and anti-developmental” land laws.

“Over the last two years, land owners have been empowered through a series of land reforms. Legal action is being taken against influential people who had illegally encroached upon the government land,” he said.

The LG said the people are at the centre of governance. “We have ensured that the interests of common citizens are protected and that they are not impacted by the campaign to remove illegal encroachments. We have been successful to a great extent in curbing corruption by issuing land passbooks in three languages.”

He said that so far, 28 lakh such passbooks have been distributed, and revenue records are being demystified for eliminating the possibility of manipulation.

Similarly, the new land-use laws have ensured that people get a reasonable and fair price for their land and the interest of farmers are protected, he said.

On Kashmir migirants, he said that the administration received 8400 applications from Kashmiri Pandits, whose land and property was grabbed forcibly in 1990. “Administration is working to ensure such properties are retrieved and handed over to KPs,” he said.

“The Kashmir Migrant Portal, which was launched in September last year for registering grievances for illegally encroached properties during the 1990s, has registered 8408 applications and action has been taken on 6336 applications, resulting in removal of encroachment on 2608 kanals of land,” he informed.

On Package and reserved category employees, “The administration is trying to solve the problems of Kashmiri Pandit brothers and sisters with utmost sensitivity. Their safety is our topmost priority. All PM package and minority employees working in the Kashmir valley have been deployed at safe places. A nodal officer has been appointed in the Raj Bhavan and in every district to resolve issues related to their security and other problems,” he said and further added that long-standing issue of availability of land for their accommodations has been resolved, and construction of 3000 accommodations for our Kashmiri Pandit brothers and sisters shall be completed this year.

Although, recruitment under the Prime Minister’s Package and reserved categories is on the strength Kashmir Division cadre, the issue of their transfer is being examined by an empowered committee.

He said a series of developmental initiatives are going on in J&K to push the UT to new heights of achievements. “Srinagar and Jammu will soon have metros, the tubes on the Srinagar-Jammu highway are also being set up on war footing,” the LG said .

He said that for the first time, J&K will have a Women Industrial Estate while promotions of almost 2000 officers that didn’t take place since 2001 are being cleared. The LG said that the special focus of the administration is on the youth as J&K’s 70 per cent economy is dependent on agriculture.

On digital reforms, the LG said, in just two years, we have laid the foundation of a new digital society and bridged the digital divide to a great extent.

The Jammu and Kashmir also said that government has achieved something remarkable in terms of education.

“After three decades of stagnation, schools were operational for 200 days last year, which is a statement of an emerging vibrant society that has broken free from shackles of the past,” he said during his speech adding, “In the realm of school education, emphasis is being laid on increasing enrolment, access to quality education, retention and introduction of an educational framework that sparks curiosity in children, focuses on value based education and makes them passionate about studies.”

70,000 children have been taken to classrooms through the “Aao School Chalein” campaign. We recorded a 17.87% increase in enrollment in the year 2022 through special focus on early child care and education.

“A record 1.88 crore tourists visited Jammu and Kashmir last year, which is the highest since independence. Infrastructure are being strengthened at Mata Vaishno Devi, Construction work of Mantalai Wellness Center has been completed at a cost of Rs. 80 crore and the design of Katra Multi Modal Station has been finalized.

He added that after the launch of the New Film Policy in 2021, Jammu and Kashmir has emerged as the favourite shooting destination for film industry and permission has been granted for shooting of 150 films and web series in less than two years.

The LG said that for the first time in the last seven decades of independence, Jammu and Kashmir is witnessing an Industrial Revolution.

“It has opened up doors of immense possibilities for the new generation. Private investment proposals worth Rs. 66,000 crore have been received within a period of around one year, during which 1455 industrial units started their operations,” he said.

“The foundation stone of Emaar Group Shopping Mall and IT Tower shall be laid in March, 2023 and 52 other industrial units will also start their operations during the same month. Further, land has been allotted to 1711 industrial units which is also a new record in the industrial history of Jammu and Kashmir.

“Another 77 industrial units are being developed on private land and in the last three years, 500 start ups have come up which have ushered in a new social revolution. Sincere efforts are being made to revive the handloom and handicraft sector,” the LG said, adding, “We are committed to provide training, design, technology inputs like GI tag and such other infrastructural support as are required for quality, branding and boosting global demand for our handicraft products”—kno