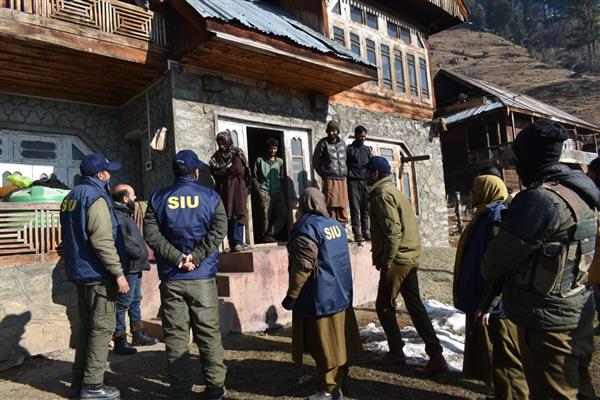 Kupwara, Jan 5: The Special Investigation Unit (SIU) of Jammu and Kashmir Police conducted raids at multiple locations in Kupwara district in connection with a case regarding militant activities in the area.

“The searches were conducted in the residential houses of suspected relatives of some eight (8) militants who have crossed LoC illegally and joined militant ranks and are affiliated with banned militant organisations like HM, LeT and JeM etc.”, the statement said adding “As per initial investigations, these militants have been found involved in actively conspiring and facilitating infiltration of militants, supplying of arms and ammunition in addition to using of Cyber space in radicalizing Kashmiri youths to join terrorist ranks besides raising funds for militant activities.”

“The searches were conducted at Hyhama, Kralpora, Mirnag, Lolab and Sulkoot localities of the district after search warrants were obtained from the designated Court.”

“During the searches, vital evidence including mobile phones and other materials have been seized which are relevant for investigation of the case for corroborating the role of these persons in perpetuation of militancy. With the investigation at its initial stages, more searches shall be carried in due course of time”, the spokesperson said.

The spokesperson in the meantime quoted SSP Kupwara Yougal Manhas as having said that the crackdown on militant elements operating within the district and those from Pakistan is a step towards dismantling the militant ecosystem working in the valley.