‘Committed to retrieve Kashmir under illegal occupation of Pakistan including Gilgit,Baltistan”: Rajnath Singh 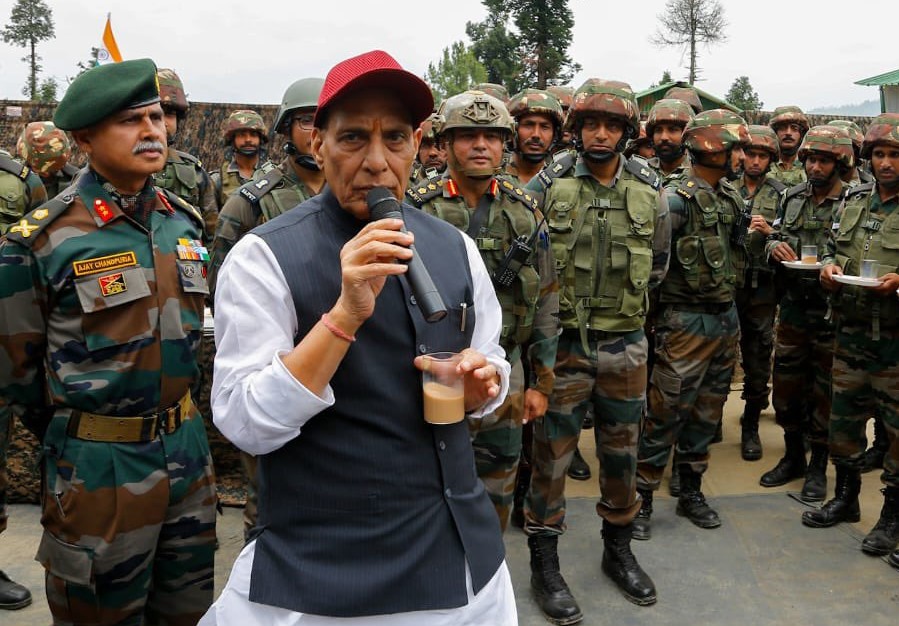 Srinagar, Oct 27: Defence Minister Ranath Singh while castigating the Pakistan government for “resorting to torture and harassment” of people of “Pakistan occupied Kashmir (PoK)”, Thursday said that India is committed to implement the 1994 resolution passed in the Parliament about retrieving the part of Kashmir “under illegal occupation of Pakistan.”

Addressing the Infantry Day function in Srinagar, Singhsaid that India feels “the pain of every citizen of PoK where torture and  harassment are regular features”.

“Pakistan government is sowing the seeds of hatred in PoK and time is not far when people will resort to mass rebellion there,” Singh said.

He said that India is committed to implement the resolution passed in the Parliament about retrieving Kashmir under illegal occupation of Pakistan including Gilgit and Baltistan. “People of PoK are being deprived of all basic rights and we are fully aware of it,” he said. October 27 is observed as Infantry Day (Shaurya Diwas)–Budgam Landing Enactmenton this day at Srinagar airport. The army on this day fought Pakistani invaders and pushed them back.

He said the dream of Sardar Valabhai Patel will be fulfilled when all refugees of 1947 will get their land and homes back. “And I assure you that day will come….,” Singh said. Pertinently, Indian Parliament resolution on 22nd February 1994 demanded that Pakistan must vacate part of Kashmir under its illegal occupation.

He said revocation of Article 370 started a new beginning in J&K. “People of J&K reposed great hope and supported the full integration of J&K with the union of India. J&K and Ladakh UTs are flourishing with every section of society getting their due rights,” he said.

He said in 1947, the Indian army gave a befitting reply to enemies who tried to play mischief by occupying Kashmir illegally.  “I pray great tributes to the Infantry regiments of the Indian army who offered supreme sacrifices by pushing the invaders back,” said Singh.

He said the Infantry Day reminds “us to renew our pledge to root out our enemies and protect the country’s sovereignty.” Singh hailed the soldiers for their valour and commitment towards protecting the borders and taking the country to new heights.