J&K to be developed as a World Class Health & Wellness Tourist destination: Minister 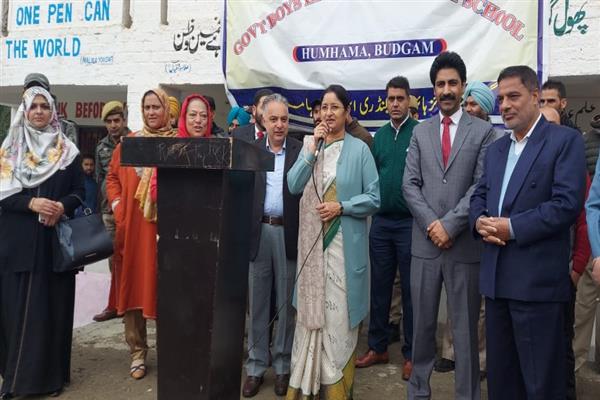 RAMBAN, OCTOBER 21\: Saying that Jammu and Kashmir would be developed as a World Class Health & Wellness Tourist Destination, the Union Minister of State in the Ministry of Women & Child Development and Ministry of AYUSH, Dr. Munjapara Mahendrabhai said the Union Government has launched various social and health sector schemes in this regard.

The Minister said this while interacting with the Media persons at Patnitop on culmination of his two days tour to district Ramban under Public Outreach Programme.

The Minister said that the Union Government under the leadership of Prime Minister Narendra Modi has launched the Public Outreach Programme to reach out at the grass-root level to listen to the issues of the general public, besides reviewing development scenarios of the districts of UT of J&K. He said that the Centrally Sponsored Schemes launched for the development and welfare of people have a great impact in ameliorating the socio-economic conditions of the people.

Earlier, the Minister inaugurated an exhibition-cum-demonstration camp organised by the AYUSH department at Patnitop in which various stalls including NCD screening, Diet and Nutrition under Ayush Poshan, Prakriti Assessment, Yoga & Lifestyle Counselling, Health check-up, medicine distribution and promotion of medicinal plants and Herbs for plantation on commercial purpose. He also distributed medicinal plants among farmers on the occasion.

Dr. Munjapara also launched a promotional film ‘Ayush ke Badhte Kadam in Jammu & Kashmir’ highlighting journey of development of infrastructure in AYUSH sector and promotion of treatment of all diseases especially life style diseases with Ayurveda, Yoga, Unani, Siddha & Homoeopathy, besides launching of AYUSH IEC material to launch UT wide campaign to sensitize the people about benefits of AYUSH treatment at Patnitop on the eve of 7th National Ayurveda Day.

Dr. Munjapara directed the AYUSH, Agriculture and allied departments to promote the cultivation of medicinal plants to meet the requirement of herbs for the preparation of medicines, saying that it would also go a long way in enhancing the income of the farmers. He also directed the ICDS department to plant more identified plants in Poshan Vatikas of Anganwari Centres under the Prime Minister’s Programme ‘Healthy Bharat, Strong Bharat’.

The Minister appreciated the role of AYUSH doctors, ASHA and Anganwari workers in fighting against COVID-19 during the world pandemic. He said that services of AYUSH and Allopathic doctors would be provided at the same locations for the convenience of patients.

Highlighting the achievements and future planning to develop AYUSH, Dr. Munjapara said that keeping in view the importance of AYUSH, the Prime Minister has established a full-fledged Ministry of AYUSH and has allocated funds to the tune of Rs. Over 3000 crores for the Ministry.

The Minister said that a Homoeopathy and Siddha College would also be established in UT on the recommendation of UT of J&K.

Later, the Minister also participated in a sanitation drive ‘Clean Mountain Save Mountain & Carry the Trash Back’ organized by the Patnitop Development Authority which was inaugurated by a Senior Sanitation Worker, Mr. Mushtaq Ahmed. He made a fervent appeal to all tourists and pilgrims visiting J&K especially Shri Mata Vaishno Devi Shrine and hill resorts to not litter these places by throwing garbage including single use plastic, besides disposing it off at proper places.

District development Commissioner, Mussarat Islam informed that all the UT and Centrally Sponsored Schemes and projects launched in the UT are being implemented for the development and welfare of people in the district.

Giving a brief account of activities of AYUSH Department, Director, AYUSH, Dr. Manmohan Singh informed that the Government has earmarked an amount of Rs. 72 crore for the infrastructural and other developmental activities across the UT of J&K. He informed that an amount of Rs. 20 crore is required for completion of ongoing developmental works under AYUSH sector. He informed that 317 health and Wellness centres have been functional in the UT of J&K and work on five 50-bedded AYUSH hospitals in both the divisions is in full swing. He informed that 300 Yoga instructors have been deployed in various Wellness centres to promote yoga culture among the people especially among children to overcome the problem of obesity.

A large number of delegations, individuals and party workers also met with the Minister and apprised him about their demands.