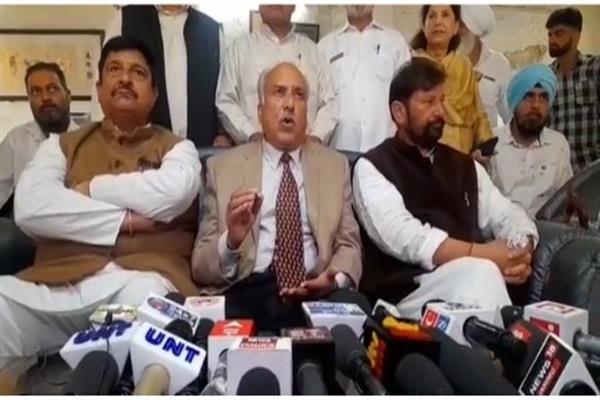 Jammu, Oct 17: National Conference MP Hasnain Masoodi on Monday on Monday asked the Government to come clear on the enrollment of outsiders in the electoral list.

Masoodi, who is heading a 14-member all party committee was flanked by Senior leaders Choudhary Lal Singh, Raman Bhalla and others held a press conference after a meeting they had called on outsider voter controversy.

After facing criticism by political parties, the government said it withdraw the order directing tehsildars to enroll outsiders living in Jammu district for over a year as voters in the ongoing revision of electoral rolls in the Union Territory (UT) ahead of the Assembly polls.

Masoodi said that the fear was reinforced by the recent order that came from the government directing tehsildars to enrol outsiders living in Jammu district for over a year as voters.

“However, it was said the order was withdraw but no replacement was issued for the same yet thus creating more confusion.There was no written order regarding revocation,” he said.

However, he said that leaders connected to the ground level have said that the voters are being enrolled as per the same controversial order issued by the Jammu administration . He said today’s all party meeting at Jammu was to discuss futher course of action against it. kns