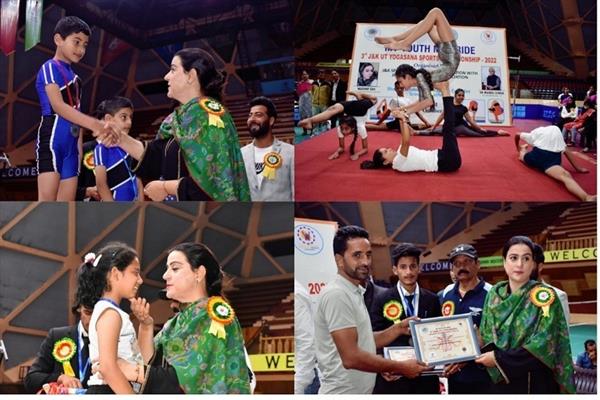 SRINAGAR, OCTOBER 07: Secretary J&K sports Council, Nuzhat Gull has said that making yoga a routine will be a great value addition to health and help fitness level to reach optimum level for which all of us are striving at present.

She was presiding over the function on the conclusion of the 3rd UT Level Yogasana Sports Championship organized by J&K Sports Council in collaboration with J&K Yogasana Sports Association in Sher-I Kashmir Indoor Stadium Srinagar.

Players from 15 districts and other institutions of the UT participated in the two day event which was one of the major yogasana events in recent times in which more than 370 athletes and 50 officials including judges from other districts and Sports Authority of India participated.

Speaking on the occasion, Secretary Sports Council said that more Yoga events are in pipeline and they shall be conducted as per the already notified ‘My Youth My Pride’ calendar and in addition to that classes for beginners shall be also held.

The events included a preliminary round for beginners followed by traditional yogasana, artistic single and pair as well as rhythmic pair.

Abhishek Sharma & Furkan Sopori in boys category and Soumya Gupta and Toiba Nazir in girls category were declared best players of the championship.