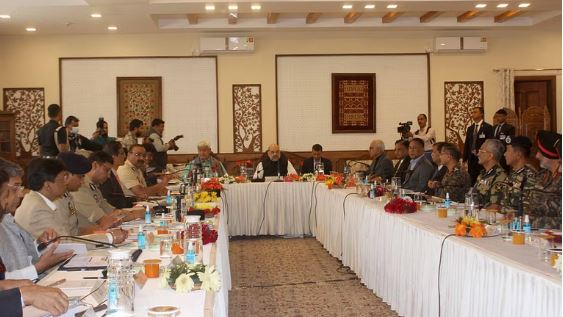 Shah, who is on a three-day visit to J&K, chaired the crucial security review in Srinagar, where top security officials including J&K DGP Dilbagh Singh, ADGP Vijay Kumar, GoC 15 Corps, DG BSF, IG BSF besides a team of Home Ministry accompanying the Home Minister, were present.

Shah, was given a power point presentation over the progress achieved on anti-militancy and anti-infiltration front.

“The Home Minister hailed the security agencies for their role post Article 370 in tackling militancy and preventing infiltration,” an official, privy to the meeting said.

He said that Shah expressed gratitude over the “improved figures” of violence related incidents that includes drop in killings of security forces personnel and civilians.

The Home Minister also expressed his satisfaction over the intelligence based anti-militancy operations and stated that security agencies must step up the operations wipe out militancy from J&K soil so that people can taste the real democracy and reap the benefits of peace.

J&K LG Manoj Sinha explained the policy adopted by the security forces—“begunah ko chedo mat, gunahgaar ko chodo mat.” The Home Minister stressed that the common man should feel free and live a life without hassles while those fomenting trouble, especially the anti-peace elements including OGWs and supporters should be crushed to the core”.

Challenges related to social media including “online propaganda” being launched by handlers sitting across was also discussed in the meeting, to which the Home Minister stressed for “adopting a sustained counter mechanism” that includes blocking the pages trying to radicalise youth through online platforms.

Sources said that the Home Minister called for steps to be taken out to reach out to youth and enhancing sports infrastructure at district level to keep youth engaged.