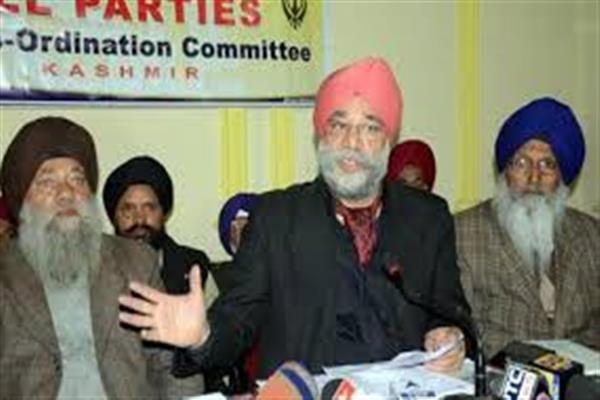 In a statement, All Parties Sikh Coordination Committee (APSCC) has referred to the visit of Home Minister Amit Shah to Jammu & Kashmir as an initiation of the electoral process in the union territory.
“The Committee has demanded restoration of statehood to Jammu & Kashmir before the holding of assembly elections,” it said.

In a statement, APSCC Chairman Jagmohan Singh Raina said that assembly elections can wait in Jammu & Kashmir adding that the restoration of statehood should be done at the earliest. He said that people of Jammu & Kashmir are yearning for the restoration of statehood and it would be apt to make an announcement about the same at the earliest. He urged Prime Minister Narendra Modi to take a lead in this regard.

“Addressing public rallies at Rajouri and Baramulla is a clear indication that the Government of India wants to start the electoral process in Jammu & Kashmir. The union government also wants to highlight its working in Kashmir so as to spell out its agenda for the forthcoming assembly elections,” said Raina.

The APSCC Chairman said that for the last one year or so the Bharatiya Janta Party (BJP) is pursuing its agenda with full force in Jammu & Kashmir. He said that issues like digitalisation, issuance of golden cards for availing free health services, free gas connection for BPL families and issuance of land passbooks to the land holders in Jammu & Kashmir are likely to dominate the pre-election discourse in the union territory.

“Packages announced from time to time by the union government have led to division among the various sections of the society in Jammu and Kashmir. Gujjars have got political voice since a member of the community has been nominated to the Rajya Sabha while as Paharis have got four percent reservation,” said Raina.

The APSCC Chairman said that Kashmiri Pandits got number of packages in the past three decades with thousands of youth of the community getting adjusted in the government departments. He said that on the other hand the Sikh minority community got nothing with even centuries old Punjabi language losing recognition in Jammu & Kashmir.

Raina appealed to Home Minister to ensure equal distribution of benefits to all the communities so that justice is delivered, he said.