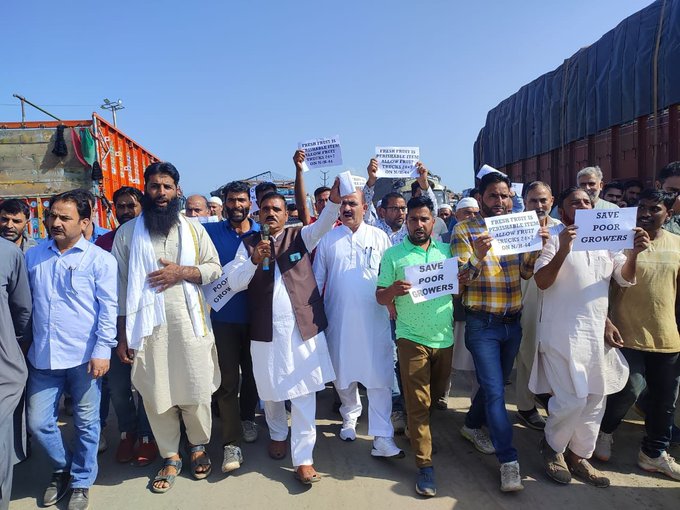 Sopore, Sep 26: Halting of fruit laden trucks on Srinagar-Jammu national highway has taken a heavy toll on Asia’s second largest Fruit Mandi in Sopore, with Mandi administration stating that they have suffered around Rs 500 crore loss in the month of September alone.

President buyers association, Fruit Mandi Sopore Mudasir Ahmed Bhat said that halting of trucks along Srinagar-Jammu national highway leads to a loss of around Rs 500 crore to the growers, buyers and dealers in the month of September only.

He said, that a buyer suffers a loss of Rs 4-5 lac per truck as the authorities are unnecessarily stopping trucks and it seems they deliberately want them to suffer. “Who is going to pay the losses,” asked Mudasir.

“If the situation doesn’t change and the trucks will not be allowed to pass, we will go for the hunger strike and the government will be responsible for that.”

Similarly, President Fruit Mandi Sopore, Fayaz Ahmed Malik said  that the fruit industry is crumbling as they already had suffered heavy losses during the last several years and government must at least ensure hassle movement of the fruit trucks so that produce will reach markets in time. “It will fetch a good rate,” he said.

Malik said, that they were hopeful that their matter will be taken seriously as they had a meeting with the chief secretary, besides the directions were passed by the government to allow the fruit laden trucks, but they fail to understand why authorities are not taking any strong steps on the ground level.

Malik, however, holds SSP Traffic Shabir responsible for the losses. “Citing traffic jam reasons, the SSP is not allowing our trucks to pass, even if the vehicles are being allowed to enter the valley”, he added.

Malik, however, urge administration to take immediate necessary steps for transportation of fresh fruit-laden trucks on Srinagar-Jammu National Highway without any hindrance.

Addressing the fruit deals and growers during a peaceful protest at Fruit Mandi in Sopore, DDC Member Adv Irfan Hafeez Lone said, that by not allowing the fruit laden trucks towards Jammu seems administration want to crush the fruit industry, as the items are getting damaged for remaining stranded for days along national highway.

He said that the fruit industry is the backbone of Jammu and Kashmir’s economy and almost 70% of the population are dependent on this industry. “Despite claiming of the backbone of the economy government should take care of it as the industry is crumbling and the growers are facing huge losses”, Irfan added.

Pertinent to mention here, that the fruit Mandis across the Kashmir valley were closed for two days— Sunday and Monday in view of the strike call given against the blockage of fruit laden trucks.

Notably, fruit growers and buyers across the Kashmir valley are continuously protesting time to time over the halting of trucks along the national highway, but despite protests nothing happened.kno