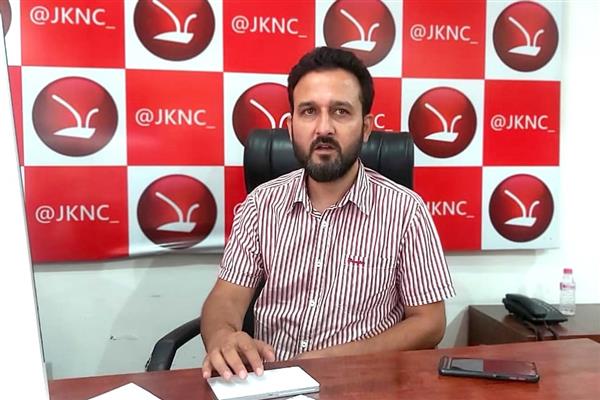 Srinagar Sept 14: The Jammu and Kashmir National Conference on Wednesday expressed concern over the falling price of Kashmiri apples in outside markets asking the GOI to take corrective measures to rationalise the rates.

Echoing the worries of the apple growers Party’s State Spokesperson, Imran Nabi Dar said the growers and traders are worried as they fear huge losses. The party has also expressed dismay over the unnecessary halting of fruit laden vehicles on the highway. “It’s such a shame that the vehicles carrying the perishable fruits are being halted for hours altogether resulting in damage to the items. This is absolute injustice with the fruit growers who have given their entire life to this industry,” Imran said, demanding that the trucks be given all day and night clearance on the national highway.

On the issue of falling prices of apples he said, “The primary reason behind the fall of rates is the import of Turkish and Iranian apples into the Indian market. We had already cautioned the government against the impending disaster to the centuries-old apple industry in Kashmir and sought stopping illegal entry of Iranian apples into the Indian markets. These Turkish and Iranian apples come through Afghanistan . Being a SAFTA member , India does not impose duty on certain imports. While Iran is not part of SAFTA, apples from that country reach India via Afghanistan, bypassing import . This mass dumping of Iranian and Turkish apples must be checked by slashing excise duties, otherwise it will adversely impact the fruit industry of Kashmir by eating out their share in the market.”