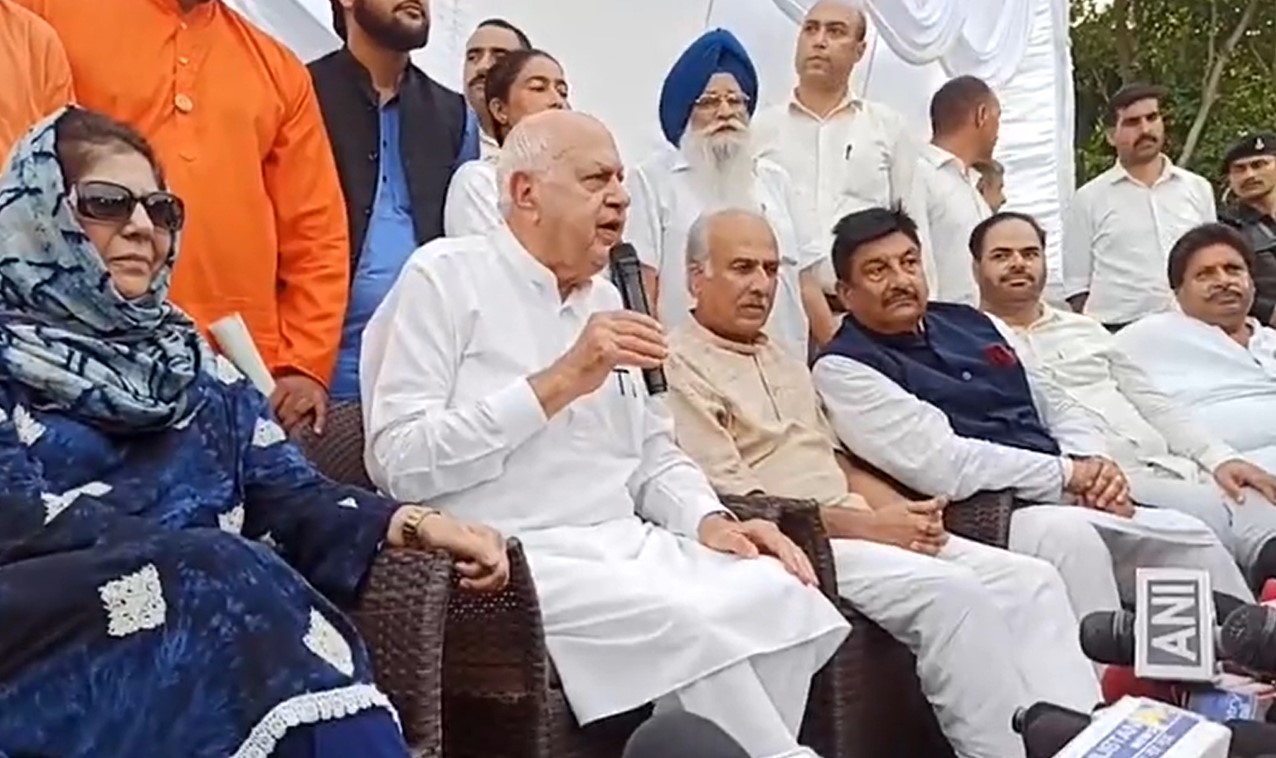 Jammu, Sep 10: People’s Alliance for Gupkar Declaration (PAGD) held a threadbare meeting in Jammu on Saturday decided to constitute a joint committee to take its fight against “inclusion of non-local voters in the voter list to its logical conclusion.”

For about two and a half hours, the representatives of various political parties expressed their opinion against giving the right to vote to the citizens of Jammu and Kashmir from other states in the lawns of former Chief Minister Dr. Farooq Abdullah’s residence in Bathindi, Jammu.

PAGD chairman and National Conference president Farooq Abdullah announced the decision on the formation of the committee after chairing the meeting.

“The main purpose was to discuss the issue of inclusion of non-locals in the voting list of Jammu and Kashmir. Charak Sahab (Gulchain Singh Charak) put forward a suggestion that a committee should be formed to take the fight against inclusion of non local voters to its logical end,” the former J&K chief minister told reporters, after the meeting.

He said the meeting later unanimously decided to form the committee which will chalk out a future strategy on the issue.

Dr Farooq said that all of them have strongly objected to the decision and intention of the election officer.

“The committee will also meet the Election Commission of India and Chief Electoral Officer of Jammu and Kashmir to further deliberate on the issue,” he said.

Commenting on the recently convened All Party meeting by Chief Electoral Officer J&K, the former chief minister said, “We don’t buy any assurance by CEO.”

“CEO first said that 25 Lakh non local voters would be included in voter list of JK but refuted the same in All Party Meeting. When confronted by colleagues and when shown their video clip in the meeting, the CEO couldn’t clarify,” he said.

Asserting that Union government lost its faith and people do not trust them at all, Dr Farooq said, “We have no faith in the Central Government, Lieutenant Governor or the Returning Officer, even before August 5, 2019 the then Governor Satay Pal Malik assured that nothing would happen, but our identity and special status were snatched away in minutes”.

He said: “We do not buy assurances given by J&K’s Chief Electoral Officer (CEO). The Prime Minister had also said that he would reduce ‘Delhi ki doori’ and ‘Dil ki doori’, but nothing has been done so far,” Dr Farooq said.

Replying to a question, he said that the BJP wants to win elections here by “hook or crook”, and it wants to form a government here. “That’s why outside voters are being registered here but we won’t let this happen at any cost.”

The all-party meeting was convened following remarks by the Union Territory’s CEO, Hirdesh Kumar, on the addition of voters to the revised electoral rolls.

This is the second meeting of PAGD against the right to vote for citizens of other states in Jammu and Kashmir and the first in Jammu province.

All the mainstream political parties, social workers and business organizations operating in Jammu province were called in the meeting except BJP and its related parties.