Azad loyalists meet in Jammu ahead of new party launch 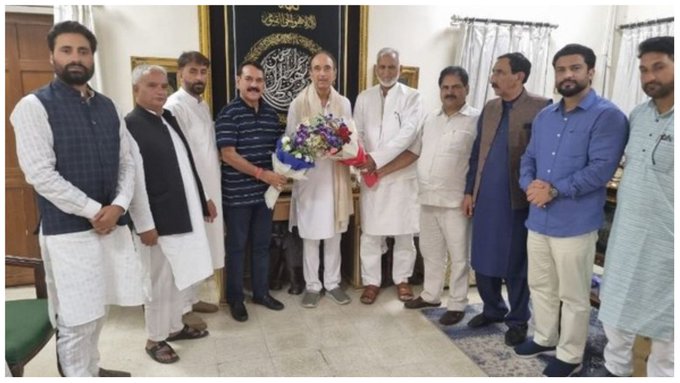 Jammu, Aug 29: Ahead of launch of the political party by veteran politician Ghulam Nabi Azad, who recently resigned from Congress, several leaders and activists met to ramp up support for the senior leader in his next endeavour.

In Jammu, a meeting was held under the leadership of former Jammu and Kashmir minister GM Saroori’s leadership, who is very close aide of Azad.

“Over 500 prominent Congress leaders and workers, including corporators, panchayat members and block-level leaders, have resigned from the party in support of Azad. The meeting was convened to send a message that we all are with Azad,” Saroori said.

“In the coming days, you will see political stalwarts across the country strengthening the hands of Azad by becoming members of his party. Since Jammu and Kashmir is likely to go for assembly elections after the completion of a special summary revision of electoral rolls on November 25, the focus of Azad is here,” he said.

Saroori, a former vice president of the Congress state unit, said the new party will contest in all the 90 assembly seats and “we are confident that Azad will be the next chief minister of Jammu and Kashmir”.

He said the doors of the new party would be open to all secular-minded people and parties.

Meanwhile, Former Jammu and Kashmir deputy chief minister Tara Chand, former ministers Abdul Majid Wani, Manohar Lal Sharma and Gharu Ram and former MLA Balwan Singh met Azad in Delhi and are likely to announce their loyalty to him on Tuesday after resigning from the Congress, a source said.

Azad, 73, a former chief minister of Jammu and Kashmir, ended his five-decade association with the Congress on Friday, terming it “comprehensively destroyed” and lashing out at Rahul Gandhi for “demolishing” its entire consultative mechanism.kno