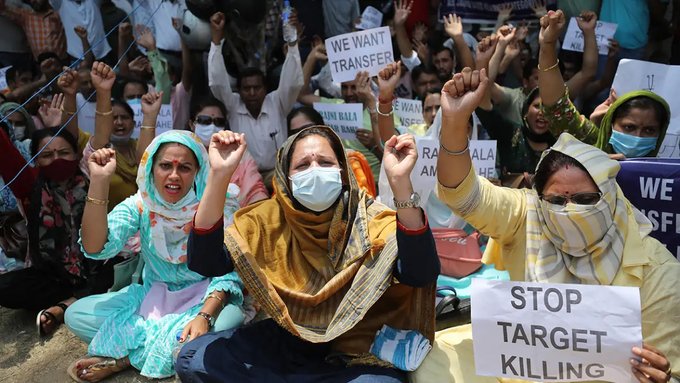 Jammu, Aug 17: Kashmiri Pandits employed under PM’s special package along with their community members held a protest demonstration in Jammu on Wednesday afternoon and blocked the Tawi Bridge against the killing of a Kashmiri Pandit in Shopian district yesterday.

The protesters said that Kashmiri Pandits are becoming soft targets in the Valley and the government has failed to ensure their safety, while incidents of targeted killings are increasing day by day, causing fear psychosis among them.

“We were employed in the Valley under special package but everyone is aware about the situation there. We want our relocation to Jammu so that we can at least remain alive,” they said.

Meanwhile, senior police officials reached to the spot and pacified the protestors, following which traffic was restored on the Tawi Bridge.kno