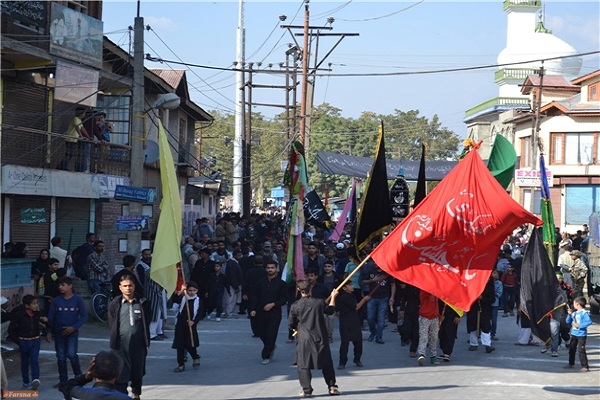 Srinagar, Aug 09: Ashoora, the 10th day of holy month Muharram, was Tuesday observed with religious zeal and fervour across Jammu and Kashmir while the Muharram processions were taken out at multiple places to pay tributes to the Karbala martyrs.

Notably, the 10th Muharram is observed as Youm-e-Ashoora when over 1,400 years ago, Imam Hussain (AS), the grandson of Prophet Muhammad (SAW) was martyred along with his family members and companions in Karbala, Iraq.

Reports said that the biggest procession was carried out from Bota Kadal to Zadibal in which the Shia mourners in thousands participated.

During the day, the people at multiple places had erected stalls where they were seen providing food stuff, water bottles and medicines to the people.

Besides, the Sunni Muslims also organized Ijtimas on the occasion in local Masjids here, during which the religious clerics threw light on the teachings of Imam Husain (AS) and also narrated the events of Karbala.

However, except near Abi Guzar locality, no restrictions were imposed anywhere in Srinagar today.

Meanwhile, paying tribute to Karbala martyrs, Additional Director General of Police (ADGP), Vijay Kumar, said that all the security related arrangements were already put in place for Ashoora. “I appeal to the people to follow the path of Karbala martyrs,” he said.

About providing water and other stuff during Ashoora, Kumar said that it is the duty of police and as such has been taking part in such activities and will continue to do so.