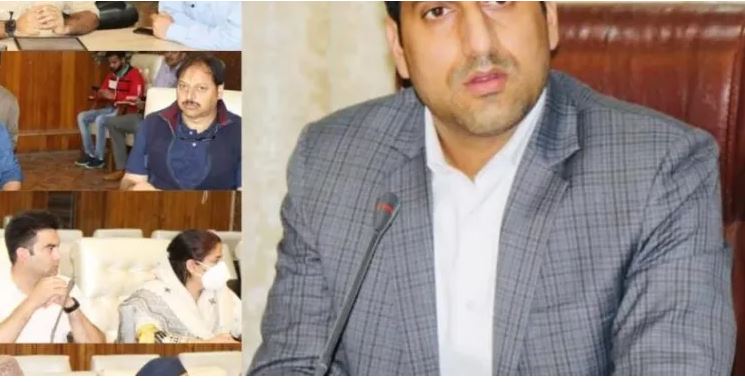 SRINAGAR, AUGUST 01: In order to ensure smooth and peaceful conduct of Muharram processions in the District and to take stock of the facilities being extended to people during the holy month of Muharram-ul-Haram, the Deputy Commissioner (DC) Srinagar, Mohammad Aijaz Asad Monday held a consultative meeting with prominent Shia leaders at Meeting Hall of the DC Office Complex, here.

During the interaction, threadbare deliberations were held over the routes proposed for conduct of Muharram Processions across the District.

On the occasion, the DC said the purpose of holding interaction is to facilitate the mourners by making all other necessary arrangements, besides sought suggestions from the stakeholders for ensuring peaceful processions during the holy month.

The DC also sought cooperation from all the Shia Associations and other stakeholder in ensuring smooth conduct of Muharram processions and other religious gatherings in the best interest of the all people.

While responding to the suggestions and issues put forth by the representatives of Shia leaders, the DC assured them that all their genuine demands will be looked into on priority and remaining proposed routes for conducting Muharram Processions will be re-examined under security point of view.

During the meeting it was informed that a total of 70 routes were proposed by different Shia Associations for conducting Muharram Processions in the District out of which 64 routes have got due consideration keeping in view the security factors. Few routes were conveyed as not safe for the larger gatherings given past episodes of violence.

With regard to arrangements like supply of electricity and water, repairing of roads, providing of ration, sanitation, street lighting and medicare facilities, the DC said that necessary instructions have already been given to all the concerned Departments.