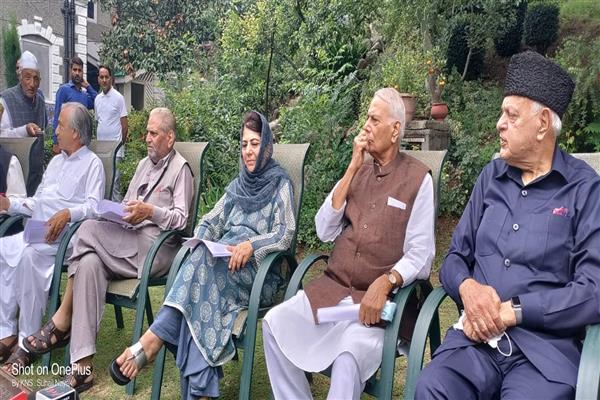 Srinagar, Jul 09\: Presidential opposition candidate, Yashwant Sinha on Saturday said that if he was elected, his priority will be to persuade the government to resolution Kashmir issue permanently.

Addressing a press conference, Sinha,  demanded restoration of statehood to Jammu and Kashmir and also said that free and fair assembly elections must be conducted at an earliest.

“I am opposed to the forcible and manipulative changes in J&K, the central government has failed to fulfill its promise to create an atmosphere for safe return of Kashmiri Pandits. The promise must be fulfilled. J&K people have suffered a lot and their desire for peace must be fulfilled,” Sinha, who is campaigning for the presidential elections, said.

He said that if he is elected as president, one of his priorities will be to urge the government to take necessary steps to resolve Kashmir issue permanently and restore peace, justice, normalcy, democracy and end the hostility towards J&K.

Sinha, who was accompanied by National Conference (NC) president Dr Farooq Abdullah, Peoples Democratic Party (PDP) Chief Mehbooba Mufti, Congress leader Ghulam Ahmad Mir, and other political leaders said that for the second time, the people in J&K would not be able to participate in the presidential polls.

“My campaign would have been incomplete in case I could not have visited Kashmir. I get disappointed when I see the situation here, which is contrary to the government claims,” he added.

He also said that there is no state in the country where elections have not been conducted for the period of four years and where the people have been deprived of the representation.

“Jammu and Kashmir is facing injustice and only a limited people are knowledgeable about the fact that the limited democracy that existed in J&K has also been murdered.”

He said that his visit to J&K was to express solidarity with the people of J&K. “It is very regrettable that the Supreme Court has not even heard the case related to Article 370 and Article 35-A nearly 3 years after the constitution was repealed,” he said, adding that long pendency of the case in the court erodes the credibility of the apex court.kno