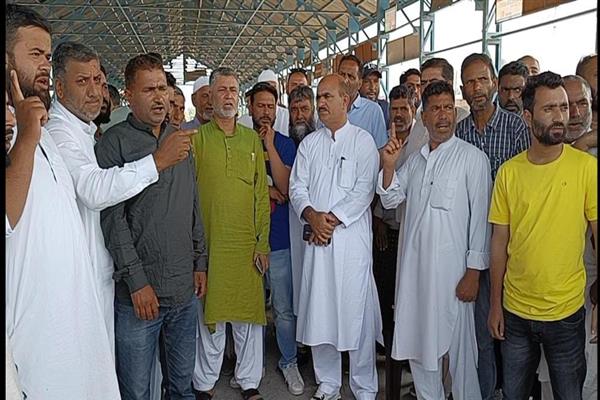 Reports said that a peaceful protest was over stopping of trucks loaded with fresh fruits on the national highway.

President Fruit Mandi Sopore, Fayaz Ahmed Malik, said that they have already suffered heavy losses during the last several years due to natural calamity and continued blockage of the highway.

He said that now recent steps taken by the administration for stopping fresh fruit-laden trucks along the highway in view of Amarnath Yatra is worrisome as it is causing huge losses.

“Since the harvesting of plum, peach, pear and early varieties of apple is nowadays in its full swing and these varieties are treated acute perishable thus needs immediate and quick transportation to various destinations outside Jammu and Kashmir,” he said.

He also said that they welcome Yatris but administration must consider and take immediate steps for transportation of fresh fruit-laden trucks, so that growers do not face any loses. kns