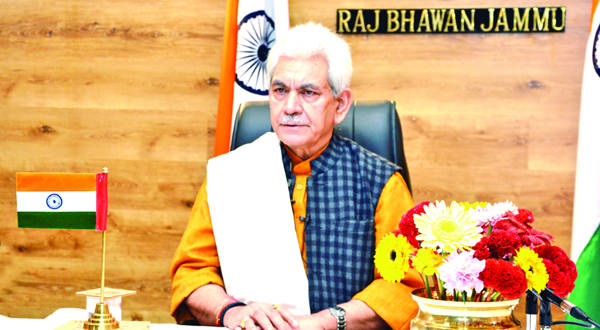 Srinagar, June 29: Jammu and Kashmir Lieutenant Governor, Manoj Sinha has invited heads of all political parties of Jammu and Kashmir for a high-tea at Raj Bhawan today in the evening in order to have discussions and deliberation for the smooth conduct of Amarnath Yatra, which is commencing on June 30 and other issues.

Sources privy to the development said that LG has send invitation to all political parties of J&K for high-tea at Raj Bhawan at 6 pm today, so as to have discussion and deliberation for the smooth conduct of Amarnath Yatra and other issues related to J&K.

They said that LG was in Jammu to flag off first batch of Amarnath Yatra pilgrims from Jammu base camp toward cave shrine in Kashmir today morning and in the meanwhile Raj Bhawan has sent the invitation to all the heads of political parties in J&K.

Sources added that as soon as LG Sinha will arrive in Srinagar today, he will hold the meeting with the heads of political parties in view of the smooth conduct of the holy pilgrimage.

Notably, Amarnath Yatra is being held after a gap of two years for remaining suspended due to Covid-19 pandemic.

For smooth conduct of the holy pilgrimage, unprecedented security measures have been put in place with additional 500 companies of security forces deployed in Jammu and Kashmir.

Meanwhile, few heads of political parties in J&K confirmed  that they have been invited by LG for high tea at Raj Bhawan today.

Talking to KNS, BJP state president Ravinder Raina said that he has also been invited for high-tea at 6 pm along with other party heads including Farooq Abdullah, Mehbooba Mufti, Sajad Lone, Altaf Bukhari and others. kns