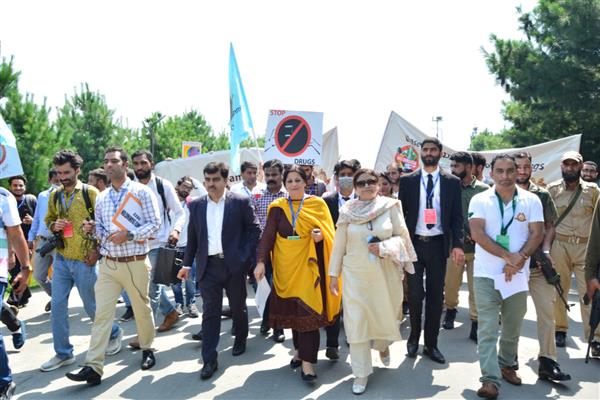 The rally, which was attended by hundreds of students, was organised by the Department of Students Welfare (DSW). Two skits were also organised by the DSW to raise awareness against drug addiction and highlight how this menace devastates the entire social fabric.

Addressing academics, students and officials on the occasion, Prof Nilofer said the student community must shoulder the responsibility of raising community-level awareness against drug addiction.

“Our students have the ability and potential to effectively lead social campaigns at grassroots and can become enablers of a great social change,” Prof Nilofer said, complimenting the DSW for organising the important programme with active involvement of the students, both boys and girls.

Prof Nilofer said that drug menace not only devours the economy but also devastates individuals and families personally, socially, financially and psychologically.

On the occassion, the VC also led the pledge-taking ceremony where she read out an anti-drug abuse pledge titled ‘Say yes to life, no to drugs’.

In another major event, the Department of Social Work (DoSW) organised a rally, a painting competion and a panel discussion to raise awareness against drug abuse. The event was held in connection with observance of the International Day Against Drug Abuse.

A skit was enacted at the Humanities Block by the students of Social Work, followed by a student rally against drug addiction in the campus. A painting competition was also held and attended by scores of students from different private and government-run schools.

Later, prizes were also distributed among the winners, even as a panel discussion was held which was joined by Registrar Dr Nisar Ahmed Mir, Dr Aadil Bashir, Dr Shazia Manzoor, Dr Musavir Ahmed and Dr Yuman Kawoosa. The panelists discussed in detail the causes and consequences of drug abuse as well as the role of society in curbing this menace.

“A collective effort by one and all is needed to address such serious societal issues,” Dr Nisar, who was the chief guest on the occasion, said.