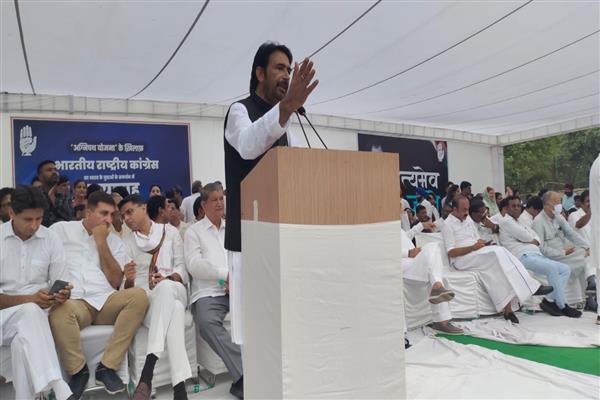 Mir termed Agnipath Scheme another betrayal by Modi Govt and demanded its immediate roll back.

Addressing hundreds of party leaders and workers at Jantar Mantar in Union Capital JKPCC President Ghulam Ahmad Mir expressed serious concern over the disappointment being witnessed amongst the youth in the country due to Agnipath Scheme brought by the Modi Govt, as that, the aspiring youth who are interested to join the Army have started feeling that their future is bleak due to the new Army recruitment scheme.

Mir told the largely attended gathering that Modi Govt is bringing law after law without debate and discussion with the result people especially the youth are agitating on the roads to secure their future.

JKPCC President urged upon the Govt to listen to the feelings of youth and address their concerns and apprehensions with regard to their future.

Congress fully support the demand of agitating youth,at the same time it fervently appeals them to lodge their protest in a peaceful manner till their concerns are addressed by the Govt, Mir added and urged upon the Govt to shun the dictatorial attitude and immediately roll back the Agnipath Scheme to restore confidence amongst the youth.