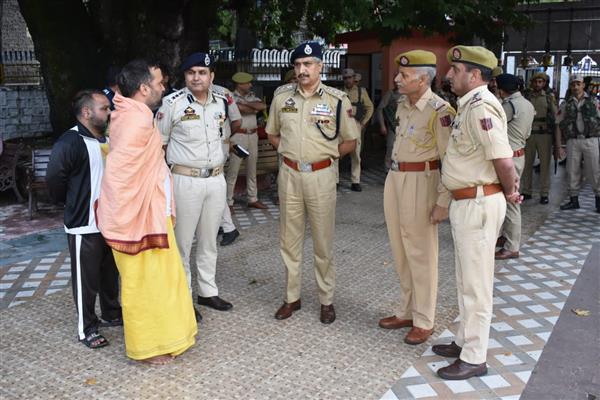 Poonch, Jun 20: In order to take review of security scenario and to discuss security situation with police as well as officers of other forces, Deputy Inspector General of Police in Rajouri Poonch range, Dr. Haseeb Mughal visited Poonch district on Monday.

As per the meeting was also attended by Additional SP Mushim Ahmed and all SDPOs and SHOs of District Poonch.

DIG asked officers to ensure that all SOPs on anti militancy front, law and order situation are reheased regularly and implemented in letter and spirit.

He also asked them to ensure that all notorious infiltration routes, vulnerable locations remain under close vigil while in-house security of all police establishments is duly maintained.

He also visited District Police Lines Poonch and interacted with officers, officials and listened to their grievances. He assured that all their genuine grievances shall be resolved in a time bound manners.

All possible measures shall be taken for the welfare of all Policemen, he said.

He also visited Surankote sub division areas including Police Station Surankote in the district and reviewed the overall situation especially in terms of Mughal Road and the challenges ahead.

Traders, trade body leaders, PRIs, prominent citizens and masses of the sub division and border villages were present in the meeting.

Participants discussed in detail the present scenario in the sub division and also put forth a number of demands and issues which were patiently listened by police officers.

It was assured to the Public that their grievances shall be taken up seriously with the concerned Departments.

Addressing the meeting, DIG Dr. Haseeb Mughal said that healthy police public relation are pivotal for a constructive atmosphere in society and are prerequisite for peace.

He hailed the cooperation by civil population of the sub division in maintenance of order and appealed the stake holders in civil population to continue extending their best possible cooperation. He also issued directions to local police administration in resolving some issues put forth by the participants of the meeting.

He said that every officer of police in the district is working with utmost dedication and zeal to ensure public friendly and disposal oriented Policing.

DIG visited all the parts of Shri Baba Budha Amarnathji temple where temple management representatives and priest talked about efforts for development of temple premises which are going on.

He issued directions to improve security apparatus wherever required in and around the temple with main emphasis on keeping vigil on every area the temple through manpower as well as CCTVs.

The measures for crowd control were also discussed in depth with emphasis on proper division of devotees in different queues in order to prevent rush inside temple.