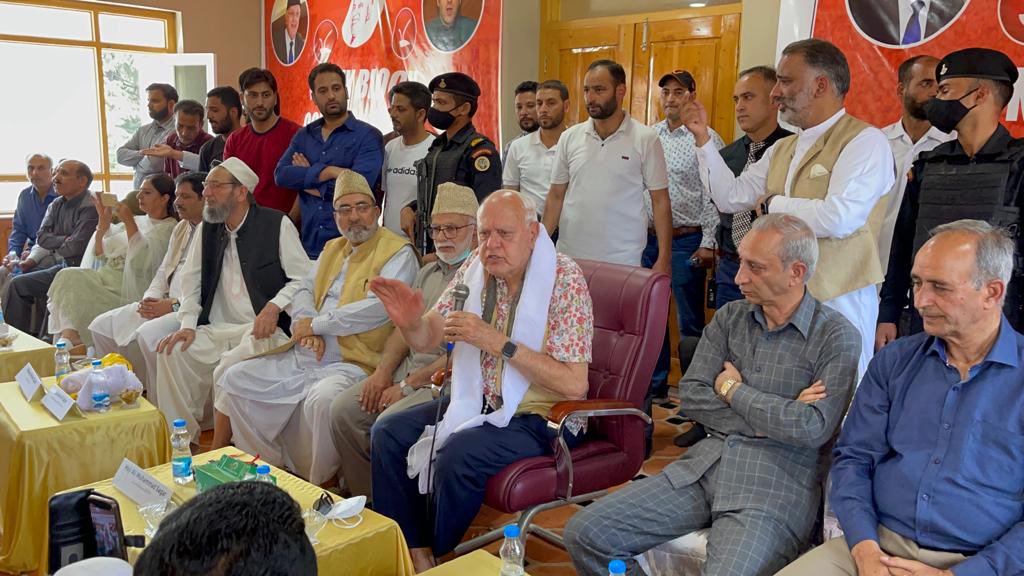 Srinagar, Jun 15: National Conference (NC) President and Member of Parliament from Srinagar Dr. Farooq Abdullah on Wednesday asked people of Jammu and Kashmir to forge unity and fight for the common challenges together and that JKNC will keep on fighting for the restoration of the Special constitutional status of J&K.

Addressing a one day workers convention of Block Khanyar at Koolipura, Khanyar, Dr Farooq stressed on the importance of maintaining unity in the ongoing people’s struggle for the restoration of their rights.

“I see no way of achieving anything in J&K without a lasting unity between different sections of our society. We have to stop seeing ourselves as Hindu Muslim, Shia- Suni, Bareli Deobandi, Kashmiri -Dogra. Unity in diversity must be our creed to last for all time and under all circumstances, otherwise there is no end in sight to our common problems in the shape of poverty, unemployment, and development. Our mutual discord will make our descent into darkness. Divided we cannot achieve anything, let alone get back our abridged constitutional and democratic rights,” he said, as per a statement.

He further stated that people, particularly the political class, have to see beyond the pale of their immediate narrow interests and work for what holds greater good for all sections of Jammu and Kashmir.

“The crescendo built up by the incumbent while rescinding our unique constitutional status has fizzled out. We witnessed towering promises made by the incumbent government getting buried without even a whimper. People have only been bombarded with overly-charged emotive rhetorical jingoism whose shrillness on the audibility scale has crossed all limits. Where is that progress? Where are those promised jobs? Where is the promised largess that was supposed to bridge Dil ki Duri and Dili Ki Doori?,” he added.

Addressing the workers, the party General Secretary Ali Muhammad Sagar said, “The last time, our artisans had a sigh of relief was on launch of Artisans Credit Card Scheme (ACCS) initiated by Omar Abdullah led government through which more than 70,000 artisans of the Srinagar district, associated with handicrafts and handlooms, were benefited. Nearly 40,000 modern looms were provided to the artisans free of cost. ”

That is how democratically elected governments work. Elected governments are subservient to people. On the contrary the chapter which unfolded after 2015, particularly after 2019 proved to be a nightmare. It witnessed implementation of GST that came as a death blow to our artisans. It was marked by implementation of the Food Security Act, which snatched food from the plates of our daily wagers and hawkers.”

“The nightmarish airdropped governance setup has further pushed the issues faced by our artisans to the backburner. It was Srinagar and Shahare Khas people again that had taken a major hit. The condition of shahre Khas roads, schools, hospitals, heritage shrines, temples, and public spaces , he said is the glaring example of governments apathy. Our artisans, our unemployed city youth, our daily wagers, and hawkers have been left in lurch. They see no light at the end of the tunnel,” he said.