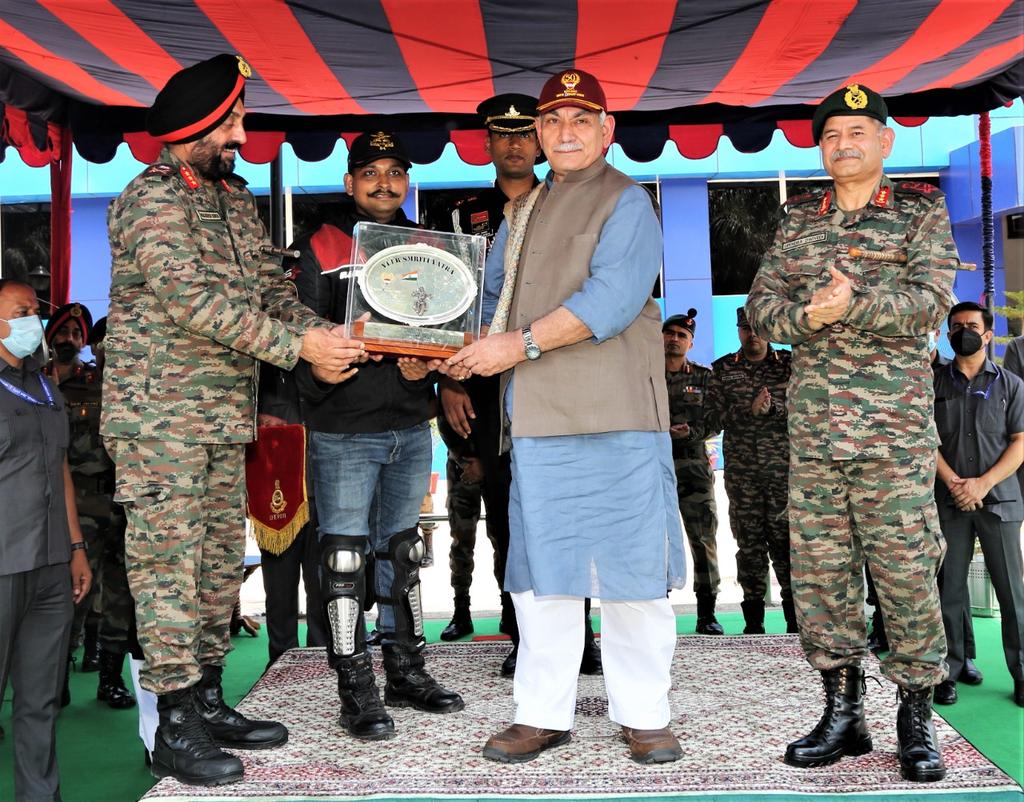 Jammu, Jun 13: Jammu and Kashmir Lieutenant Governor Manoj Sinha on Monday said better coordination by security agencies is needed to deal with continuous attempts by outside forces to foment trouble in J&K and to completely destroy the “terror ecosystem in UT”.

Sinha said the Government has a clear-cut policy on dealing with terrorism – “not to spare any militant and not to touch any innocent”.

The LG said that “terrorists and their supporters should be handed out the same punishment’.

“Attempts by outside forces (to foment trouble in Jammu and Kashmir) are continuing. There is a need for strong action in the hinterland as well as on the borders”, Sinha told army personnel at a function organised in connection with the golden jubilee of the Indian Army’s 16 Crops here.

He said that apart from dealing with (infiltrating) ‘terrorists on the borders’, troops have to be ready to crush them in the hinterland.

“They (terrorists) are out to cause destruction in the society at the behest of the neighbouring country. To deal with them, you have to increase your potential and vigilance along with better coordination with all security agencies”, he said.

“Our enemies are making desperate attempts to create unrest in J&K through drug trafficking, smuggling of arms through drones and through social media but government’s determination and the indomitable courage of our Police and Security forces will not let the enemies outside and within our borders succeed,” the Lt Governor asserted.

Asserting that the Government is committed to “stamping out terrorism” from Jammu and Kashmir, he called upon agencies to ensure the destruction of this “eco-system”.

“Our resolve should be to ensure an assault on full ecosystem”, he said. He referred to attempts to foment trouble in J-K, saying social media is being used from across the border and drones were being sent.

“We are committed to ensuring the safety and security of people, unity and integrity of the nation and harmony”, he said while lauding the forces for improving the security situation in J-K.

He said that Jammu and Kashmir will regain its glory and reach the pinnacle of progress.

LG also extended greeting to all ranks of Indian Army’s White Knight Corps on its 50th raising day. Lt Governor lauded them for their exemplary contribution in many strategic operations and for helping maintain peace and tranquillity in the region.

White Knight Corps is the most dynamic operational Corps of the Indian Army. Since its raising in 1972, it has lived up to its motto of ‘Making the First Move and Striking in All Directions’, the Lt Governor observed.

The Lt Governor said that over the years, White Knight Corps has proved its mettle not only in combat, thwarting evil designs of adversaries, restoring normalcy and counter-terrorist operations in J&K but also made invaluable contribution in development of the region.

“Making 21st Century, J&K’s century is our resolve and nothing can hinder our progress. Our armed forces are working with one single aim, with one single intention to make J&K excel in every sphere of development, the Lt Governor added.

Expressing his gratitude, the Lt Governor lauded the unparalleled courage and valour of security forces and termed them as the living faces of sacrifice and bravery.

Outlining the impactful social work done by Indian Army in addition to their professional duties, the Lt Governor acknowledged the indispensable work done by 16 Corps in the field of education, health, housing, etc. in the areas bordering Poonch, Rajouri, Kishtwar and Jammu, under Operation Sadbhavna.

Present on the occasion were ADGP Jammu, Mukesh Singh and Divisional Commissioner Jammu, Ramesh Kumar, besides senior officers of Army and Civil Administration.