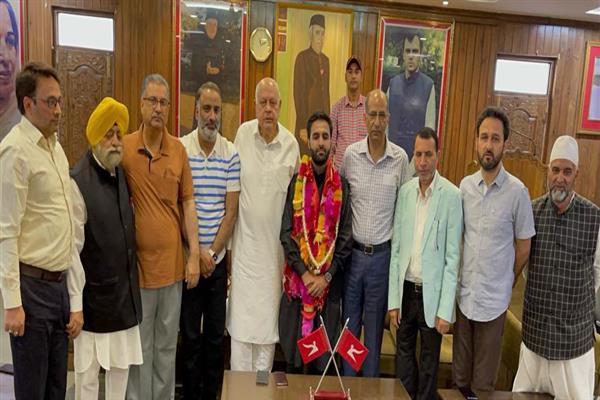 Srinagar June 09: National Conference (NC) President and MP from Srinagar Dr Farooq Abdullah on Thursday called for ending the gap between youth and politics, saying only NC has the capability of bringing more youth into politics.

This he said while welcoming a prominent political youth activist Iqbal Nabi Dar from Katipora, Tangmarg into the party fold here at party headquarters Nawa-e-Subha, Srinagar.

“A sense of choked democratic spaces and deepening insecurities in their own land remains the biggest hurdle in the growth of our youth. The persistent denial of political rights also contributed significantly to the widespread unrest, anxiety, and frustration in them,” Abdullah said.

The party he said was actively involving youth at all decision making levels to attune party policies to their needs.

“Democratically elected governments since 1996 worked day in and day out to drive out fear from our youth. We worked towards creating safe spaces for them. But it seems that the dividends brought by the efforts of successive popular governments stand liquidated today.”

“Youth’s participation in politics in Kashmir is a complex story to tell, yet the party with its immense efforts and capabilities has been able to bring more youth into its ranks. Today’s joining is an effort in this direction. There is a greater need to amplify the process for a better future,” he further added.

The story of Kashmir’s youth is directly linked to broken promises, shrinking of democratic space and denial of any meaningful participation in a genuine democratic exercise, Dr Farooq said, adding that the August 5 2019 decisions have further deepened the trust deficit between the local youth and government.

“While youth in the rest of India have speedily become part of a changing economic paradigm the youth in Jammu and Kashmir are still mired in the question of their political future, their identity, their lands, jobs and much more,” he added.

National Conference, he said will continue to shoulder the worries of JK youth and strive towards giving a secure future to them.

The new entrant on the occasion vowed to make the party stronger at grass root level.