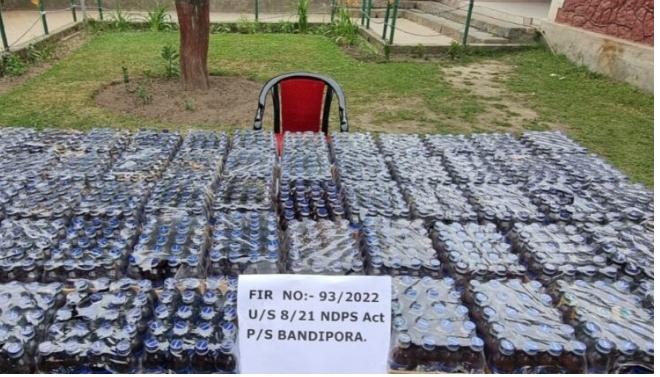 “Today police station Bandipora received a specific information that one person namely Maqsood Ahmad Rather S/o Mohmad Maqbool Rather R/o Nathpora Kaloosa Bandipora has concealed huge consignment of psychotropic substances in the premises of his residential house,” police said in a statement, adding, “Acting swiftly on this complaint a police party led by SHO police station Bandipora Inspector Ashiq Ahmad under the supervision of DYSP Hqrs Bandipora Shafat Mohmmad-JKPS raided the particularly house and during search recovered 1300 Bottles of COCAS-DX and the accused was also arrested.

A case FIR No. 93/2022 under relevant sections of NDPS Act was registered in police station Bandipora and further investigation are underway.

“During preliminary inquiry it was revealed that the accused had concealed these psychotropic substances for further sale to youth of the area in order to make them drug addicts. General public of the area have appreciated this swift action of Bandipora police,” the statement reads, adding, “People are requested to come forward with any information regarding drug peddlers and help police in eradicating the menace of drugs.”

Moreover, the accused is member of Jammu and Kashmir Apni Party and recently lost post of Vice President MC Bandipora through a no-confidence motion.

Meanwhile, District President Bandipora for J&K Apni Party, Syed Shafaat Qazmi said that there is no place for such elements in the party, adding law will take its own course.