‘Entire government machinery is working to nail down the terror mongers” in J&K: BJP’s Abhinav Sharma 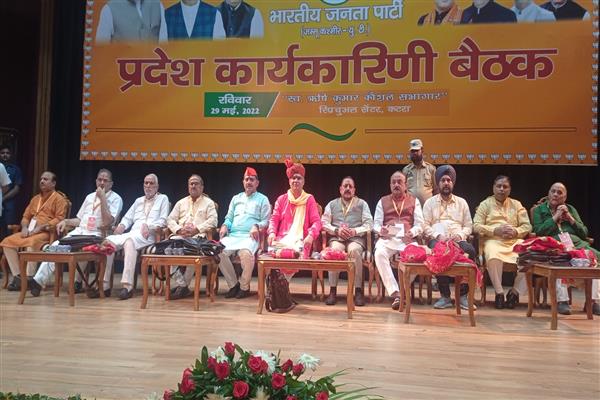 Srinagar May, 29  : Abhinav Sharma, senior Advocate and Spokesman BJP J&K on Saturday said that BJP Government led by Prime Minister Narendra Modi is committed to restore lasting peace in the Union Territory of J&K especially the Kashmir Valley and for this concerted efforts are underway at various levels.

In a statement, the senior BJP leader said that multifaceted efforts are being taken to nail elements inimical to peace in the Valley and sooner than later the peace will prevail.

Taking the specific case of Kashmiri Pandit employees the Prime Minister’s special package, he said that UT administration under the stewardship of LG Manoj Sinha is on job to ensure their safety as already several steps have been taken in this direction and LG as the head of the UT has affirmed that his administration will do everything possible to address the grievances of the section of employees currently working in the Valley.

He said that entire government machinery is working to nail down the “terror mongers and the days are not far when the Kashmir will witness peace and once again become top tourist destination for the people living across the country and even abroad”.

The BJP Spokesman said that “targeted killings by the terrorists shows their desperation because the security forces have cut down their wings and out of frustration they are attacking the soft targets which has exposed them before the people of Kashmir, who have started supporting the security forces to zero down the terrorists so as to get rid of this vicious cycle of violence as soon as possible”.