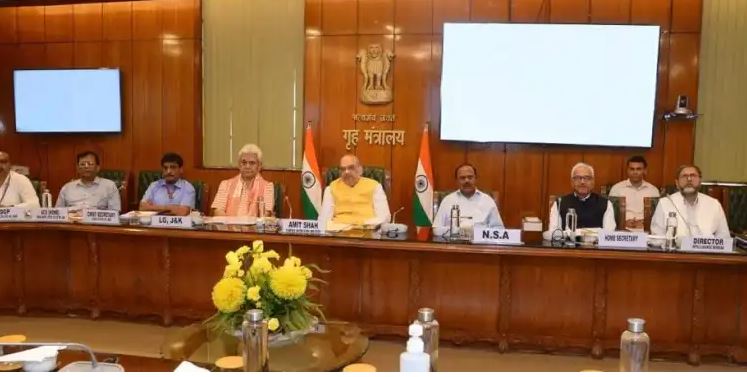 Srinagar, May 17: Union Minister of Home Affairs and Minister of Cooperation Amit Shah on Tuesday held a review meeting in New Delhi on the security situation in Jammu and Kashmir.

The meeting was attended by the Lieutenant Governor of Jammu & Kashmir Manoj Sinha, the National Security Advisor Ajit Doval, the Chief of Army Staff, senior officials of the Government of India and the Jammu and Kashmir administration.

“He said to fulfill Prime Minister Narendra Modi’s vision of a prosperous and peaceful Jammu & Kashmir, security forces should ensure zero cross-border infiltration to wipe out (militancy) in the Union Territory.”

Home and Cooperation Minister also reviewed the preparations for Amarnath Yatra at the high level meeting also attended by Chief Secretary of Jammu and Kashmir and senior officials of various Ministries and Departments of the J&K Government.

“The Union Home Minister said that it is the priority of the Modi Government that the pilgrims coming for the Amarnath Yatra should have hassle free Darshan and they should not face any problems,” he said as per a separate statement, adding, “Amit Shah directed that arrangements should be made for all essential facilities including movement, lodging, electricity, water, communication and health of the Amarnath yatris.”

He said that this is the first journey after the COVID-19 pandemic and in case yatris have any kind of health related problems due to the high altitude, then adequate arrangements will have to be made, the statement reads. “The Union Home Minister said that number of mobile towers should be increased on the Yatra route for better communication and dissemination of information.” He also instructed deployment of equipment to open the route immediately in case of landslides, the statement reads.

Amit Shah also directed ensuring adequate number of oxygen cylinders, and adequate number of medical beds at altitudes above 6,000 feet and deployment of ambulances and helicopters to deal with any emergency medical situations. “He said that all types of transport services should be increased during the Amarnath Yatra for the convenience of yatris.”