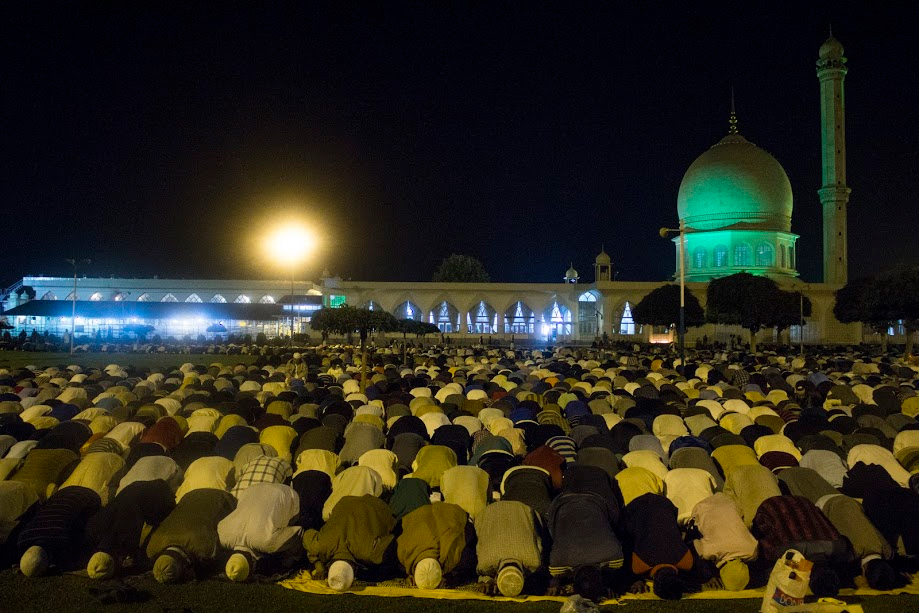 Srinagar, Apr 29: Shab-e-Qadr or Lailat-ul-Qadr and Jumma-tul-Vida, the last Friday of the holy month of Ramadan, were celebrated with religious fervour by the Muslims across the Valley.

The biggest congregation on the twin occasions were witnessed at Dargah Hazratbal where the devotees in large number attended the special prayers.

Witnesses said that the devotees from different areas across Kashmir reached Dargah Hazratbal here on Thursday evening to participate in the congregational night-long prayers on the eve of Shab-e-Qadr.

Similar rush of devotees was also witnessed on Jumma-tul-Vida when the Muslims had a glimpse of the holy relic at Hazratbal shrine, witnesses said.

Arrangements were made for special prayers in Masjids and the shrines across the Valley to mark the holy night and seek divine blessings. The devotees attended the religious gatherings to seek forgiveness from Allah Almighty and his blessings.

Masjid’s, houses and streets remained decorated with colorful pennants and buntings at multiple places while most of the Masjid’s had also arranged completion of recitation of Quran in this night.

According to the holy Quran, the first verses of the Quran were revealed to Prophet Hazrat Muhammad (PBUH) in this night.

The night has special significance as it is better than one thousand years and the angels descend therein by the permission of Allah Almighty.

This is one of the holiest and most blessed nights, which is likely to occur on one of the odd nights in the last 10 days of Ramadan and most likely to be the 27th of the holy month.

However, the historic Jamia Masjid in the Old City area of Srinagar remained closed for the special prayers on Shab-e-Qadr as well as on Jumma-tul-Vida as security measures.

The locals said that it is for the third straight year that the historic grand Masjid has been kept closed by the authorities for the special prayers, expressing their anguish over the decision.

Moreover, the government had also made special arrangements on the occasions and had also directed the Power Development Department (PDD) and Public Health Engineering (PHE) officials to ensure adequate and uninterrupted electricity and water supply respectively on this special occasion. kno