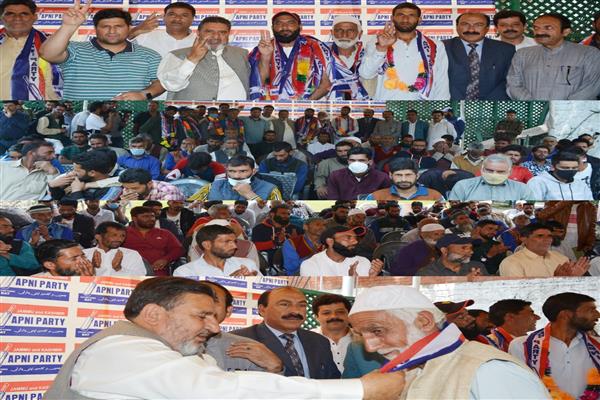 Those persons who joined belonged to Heerpora, Dachnoo, Borihalan and some other areas of District Shopian.

The new entrants were welcomed into the party fold by Syed Mohammad Altaf Bukhari who in a released statement to the press said Shopian holds high value in the demography of Jammu and Kashmir and many power hungry politicians have used the people of Shopian as mere vote bank during elections on pretext of restoring Article 370 and 35A. He stated that Shopian has witnessed unprecedented times and now the time has come to change the narrative by making the people of Shopian empowered, self sufficient and pave way for development and prosperity in the entire district.

“People of Shopian especially the youth have been derailed by the greedy good-doers who have raised false claims of restoring the Article 370 just for winning the elections. Power hungry politicians have sent their children abroad to study leaving the youth of the valley astray for their own political gimmick. The traditional politicians have been unmasked and now Apni Party will pave way towards the betterment and welfare of the common masses especially for the Youth in terms of empowerment, employment and other welfare measures,” he said.