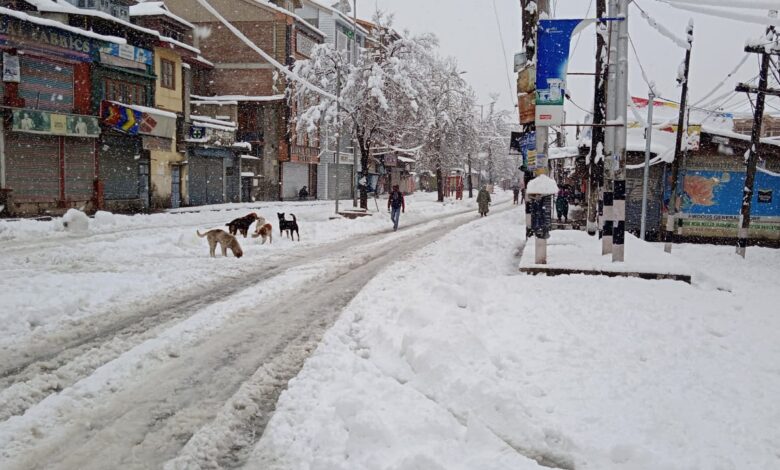 Srinagar, Mar 3: Weatherman has forecast widespread light to moderate rain and snowfall in Kashmir Valley from Sunday night to March 8.

“As expected, light rain/snow occurred at some places Kashmir. Currently, weather is overcast to cloudy at most places of Kashmir & at some places of Jammu,” a meteorological department official said in a statement to GNS.

“Current weather likely to continue till tomorrow morning. Thereafter, weather likely to remain partly cloudy during March 4 and 5th,” he said, adding, “Another Western Disturbance is likely to affect J&K during 6th (night) to 8th due to which we expect widespread Light to Moderate Rain/Snow( mainly over higher reaches).”

He however said that there was no forecast of any significant weather till March 7.

Meanwhile, Gulmarg received fresh snowfall while rains lashed some parts of Jammu and Kashmir including this summer capital. With overnight cloud cover, the night temperature hovered around above freezing point in all observatory places of the meteorological department barring the Gulmarg.

Qazigund, the gateway town of Kashmir, had 0.4mm of rain and recorded a low of 0.9°C against 2.0°C on the previous night, he said.

Kokernag, also in south Kashmir, had a low of 0.9°C against 1.4°C on the previous night, the official said.

Pahalgam, the famous resort in south Kashmir, recorded a low of 0.5°C against minus 0.8°C last night, he said.

Gulmarg received 7 cms of fresh snowfall and recorded a low of minus 4.4°C against minus 5.4°C on the previous night, he said.

The temperature was 0.1°C below normal for this time of the year in the famous resort in north Kashmir’s Baramulla district, he said.

Kupwara town in north Kashmir recorded a low of 4.6°C against 3.5°C on the previous night, the official said.