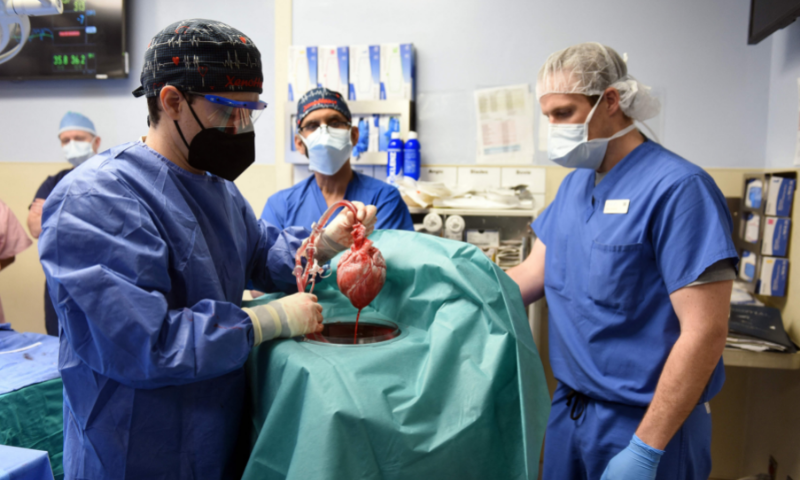 Doctors at the University of Maryland School of Medicine (UMSM) said Mr Bennet had a life-threatening heart disease but did not specify his illness.

“We are all very excited to see this pig heart beating in this human. This pig heart has performed very well so far. Even beyond our expectations, since we have not seen any signs of rejection,” said Dr Mohiuddin in an interview released by the UMSM.

Doctors and surgeons at the UMSM told The New York Times (NYT) that the eight-hour operation took place in Baltimore on Friday, and the patient, a Maryland resident, was doing well on Monday.

“It creates the pulse, it creates the pressure, it is his heart,” said Dr Bartley Griffith, the director of the cardiac transplant programme at the medical centre, who performed the operation.

“It’s working and it looks normal. We are thrilled, but we don’t know what tomorrow will bring us. This has never been done before,” he told the NYT.

“It is the first successful transplant of a pig’s heart into a human being,” the newspaper noted. “The breakthrough may one day lead to new supplies of animal organs for transplant into human patients.”

Dr Mohiuddin is the director of the university’s xeno­transplant programme. Taking a tissue or organ from a donor of a species and planting it in the body of another species is called xenotransplant or xenografting.

“We have modified ten genes in this pig heart, knocking out four genes. Three of those responsible for producing antibodies that cause rejection,” he explained. “And one gene was knocked out to control the growth of pig and its organs.”

Dr Mohiuddin said that hundreds of thousands of people across the globe needed organs and “unfortunately, like this patient, may not qualify for a transplant”.

So, “if xenografts become readily available, and are allowed to be put-in in these patients, all of them could receive hearts or any other organs from these modified pigs. And we would be able to save their lives”.

Declaring the process “a game changer”, Dr Mohiuddin said that if this transplant worked, “we will now have all these organs readily available. And I hope it will work”.

Dr Mohiuddin did his MBBS from the Dow Medical College, Karachi in 1989 and did his residency at the Civil Hospital Karachi in 1990 and 1991. Between 1991 and 1993, he did his fellowship in transplantation biology and immunology at the Department of Cardiothoracic Surgery, University of Pennsylvania Medical Centre. (Dawn)