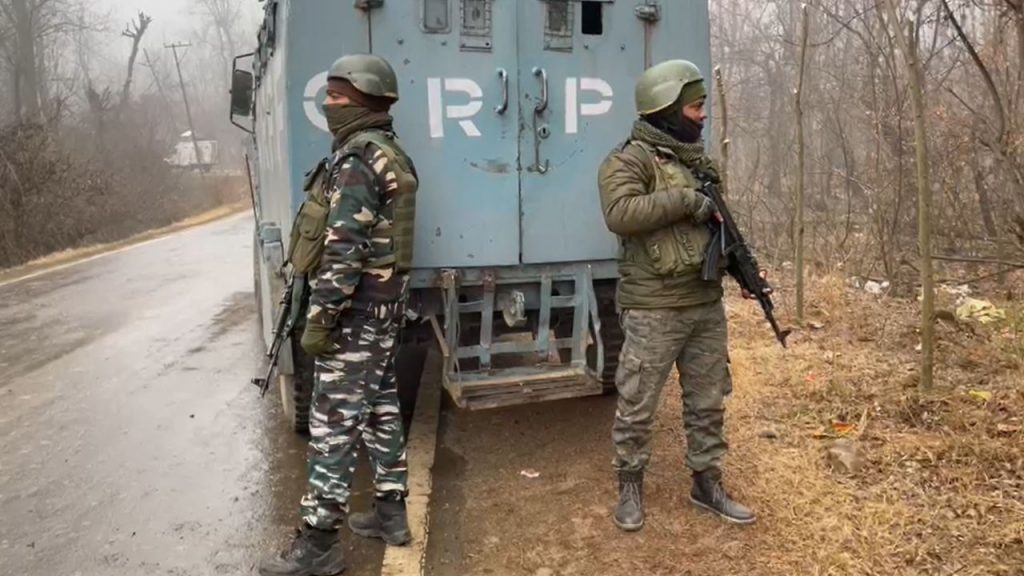 “Based on a specific input generated by Police regarding presence of (militants) in village Zolwa Chadoora area of Budgam, a joint cordon and search operation was launched on January 6 evening by Police and Army’s 50RR in the area,” a police spokesman said in a statement.

“During the search operation, as the presence of (militants) got ascertained they fired indiscriminately upon the joint search party, which was retaliated, leading to an encounter.”

Later on, he said, CRPF also joined the operation. “In order to evacuate the civilians trapped around the encounter site, the joint team ensured the evacuation of all civilians to the safer places,” he said, adding, “Besides, to avoid any collateral damage due to darkness, the operation was suspended during night hours.”

However in the wee hours, the operation resumed, resulting in the killing of three militants linked with JeM. “During encounter one Army Officer received minor splinter injury.”

One of the killed militants has been identified as Waseem Mir son of Ghulam Qadir Mir resident of Nowgam Srinagar who was active since December 2020, he said. “As per reliable sources and documents recovered, the other two killed (militants) appear to be foreigners, however further identification is being ascertained.”

As per police records, he said, Waseem was a categorized militant and part of group involved in several cases including attacks on security forces and civilian atrocities.

Several cases were registered against him.

“Waseem was involved in killing of Inspector Parvaiz Ahmad on 22 June 2021. He was also involved in grenade attack on CRPF Bunker near Aali Masjid Chowk at Eidgah Srinagar in which 01 civilian and 01 police personnel were injured.” Besides, he said, Waseem was also involved in brainwashing and motivating the youth of Central Kashmir to join militant folds.

Incriminating materials, arms and ammunition including 3 AK-56 rifles were recovered from the site of encounter. “All the recovered materials have been taken into case records for further investigation.”

He said police have registered a case under relevant sections of law and investigation has been initiated. “People are requested to cooperate with Police till the area at encounter site is completely sanitized and cleared of all the explosive materials, if any.”

IGP while sharing the details regarding encounter said that with the killing of Waseem, only one militant hailing from Srinagar is left out now “who will be either arrested or neutralised at the earliest.” He said so far 11 militants including 6 foreign militants were killed in different encounters in this year from last 7 days.