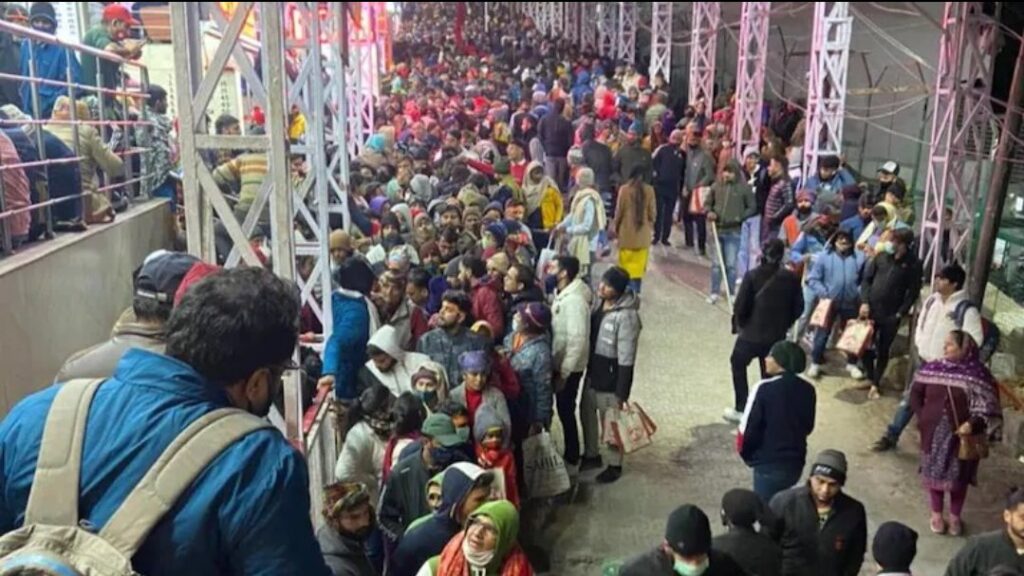 Jammu, Jan 01: Massive tragedy stuck here on New Year Eve in which 12 pilgrims died and 14 others were injured in a stampede at Jammu and Kashmir’s Mata Vaishno Devi shrine, Officials said Saturday.

Official sources said the stampede was triggered by a massive rush of devotees on the occasion of New Year at the shrine. They said that the incident occurred around 2: 45 am in the midnight, when large number of devotes queued to have Darshan of sanctum sanctorum inside the cave shrine on Trikuta hills in Katra ended up in chaotic situation.

“The stampede broke out when a huge crowd of devotees, who had come to pay their obeisance to mark the beginning of the New Year, entered the Vaishno Devi Bhawan,” the officials said.

The police said that rescue operations started immediately and all the injured have been taken to hospitals, where condition of some is stated to be “serious”.

“A high level inquiry has been ordered into the stampede. The Inquiry Committee will be headed by Principal Secretary (Home) with ADGP, Jammu and Divisional Commissioner, Jammu as members,” officials said.

“Deeply pained at the loss of lives due to stampede at Shri Mata Vaishno Devi Shrine. My condolences to the families of the deceased & prayers with the injured,” the Lieutenant Governor of J&K, Manoj Sinha said in a tweet from his official handle.

He said that he spoke with the Prime Minister and “briefed him about the incident.” He further announced that an amount of Rs10 lakh each would be given to the families of those who lost their lives in the stampede and Rs 2 lakh to those injured. He also stated that the shrine board will bear the cost of treatment. Home minister Amit Shah also expressed grief over the loss of lives

“The tragedy due to a stampede at Mata Vaishno Bhawan is heart-wrenching. Anguished by the loss of lives due to it. My condolences to the bereaved families in this sad hour. Praying for the speedy recovery of the injured,” said Union Home Minister Amit Shah in a tweet.

Prime Minister Narendra Modi is also monitoring the tragic situation, a minister in his office said.

“Extremely saddened by the loss of lives due to a stampede at Mata Vaishno Devi Bhawan,” said Prime Minister Narendra Modi, sending his “condolences to the bereaved families.”

The PMO said that the amount would be given to the families of those who lost their lives due to the stampede at Mata Vaishno Devi Bhawan. The injured would be given Rs 50,000, the PM’s Office added. Defence Minister Rajnath Singh also grieved over loss of life in stampede.

“The tragedy due to a stampede at Mata Vaishno Bhawan is heart-wrenching. Anguished by the loss of lives due to it. My condolences to the bereaved families in this sad hour. Praying for the speedy recovery of the injured,” Rajnath Singh wrote on twitter.

Union Minister Jitendra Singh, the Minister of State in the Prime Minister’s Office said that PM Narendra Modi is “personally monitoring and keeping track of the tragic situation arising out of stampede at Mata Vaishno Devi shrine.”

He further stated that PM Modi has “conveyed his sympathies to bereaved families and issued instructions to provide all possible medical aid & assistance to the injured.”

Senior officials and representatives from the shrine board are at the spot. Additional Director General of Police (ADGP), Mukesh Singh has confirmed that 12 pilgrims have died and at least 14 others are injured in the stampede. He added that injured have been taken to a hospital. kno