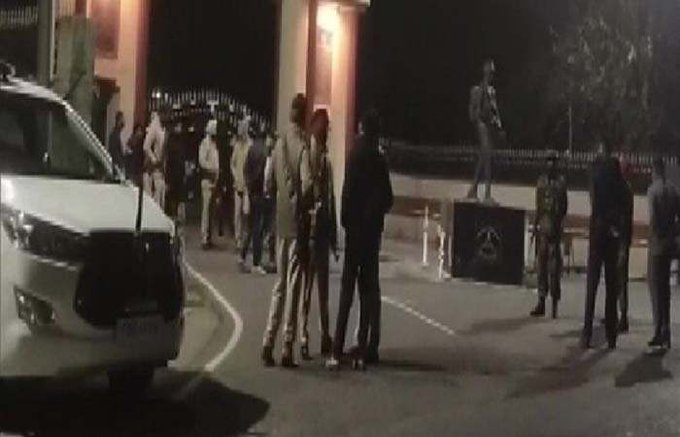 Jammu, Nov 22: A high alert has been sounded in the border belt of Punjab—Jammu and neighbouring parts of Jammu division after a mysterious blast occurred outside a gate of the Army cantonment in Pathankot city, officials said Monday.

Police sources said that the authorities sounded alert after a low intensity mysterious blast occurred outside Triveni gate of the cantonment in strategically important Pathankot, where armed forces have considerable presence.

However, no casualty was reported in the blast that took place late on Sunday night in front of Triveni gate of the cantonment, they said. “Part of the grenade has been recovered after the blast and is being investigated,” they said.

Police said that some unidentified motorcyclists lobbed the grenade in front of the military area, and they were verifying CCTV images.

Police sources said that on basis of information received from Satnri that a bike had passed in front of the camp at night. The people aboard threw a grenade towards the gate, which exploded. He informed the authorities. “The area was immediately sealed and searched every now and then. The CCTV installed at the gate is also being scrutinized,” they said.

SSP of Pathankot, Surendra Lamba said: “CCTV footage of the area will be watched to know the facts.” After the blast, an alert has been sounded in the area, they said.

Jammu and Kashmir police particularly in Jammu’s Kathua also established checkposts on state borders. Strictness has been increased at the checkpost.

Strategically important Pathankot, Being part of Army’s Yol based Rising Star Corps, the Pathankot district of Punjab is one of the most important bases of the Indian Army.

Geographically positioned near conflict ridden Jammu and Kashmir and high Himalayan—Himachal Pradesh, Pathankot serves as a base for Armed forces and para military forces.

Lt Col among seven soldiers were killed in this attack. All the militants had come through the Ravi River on the India-Pakistan border. On reaching Indian territory, the terrorists hijacked some vehicles and reached the Pathankot airbase. Hand grenade has been found in Firozpur

Even before this, more than half a dozen tiffin bombs and hand grenades have been found in Punjab. Not only this, the police have also busted three such modules, in which people have agreed to commit militant acts for money. kno