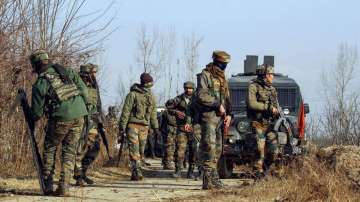 Srinagar, November 20: An unidentified militant has been killed in an ongoing encounter at Ashmuji area of South Kashmir’s Kulgam district on Saturday.

A senior Police officer said that one militant has been killed in initial exchange of firing. However the identity of the militant is yet to be ascertained.

Earlier reports said that a joint team of Police, army and CRPF launched a cordon and search operation in Ashmuji.