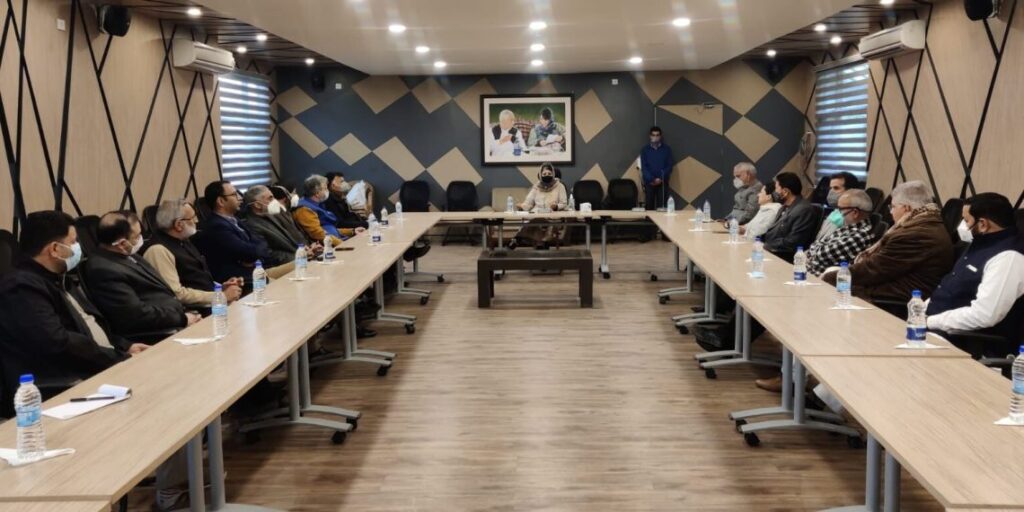 The Political Affairs Committee (PAC) of the party that met with the party president Mehbooba Mufti in chair observed that “resorting to naked communalism and pitting people against each other on the basis of religion, cast, sect and ethnicity are the only tools of the BJP to cover-up its failure in governance hence divisive policies are gaining fresh ground and are being promoted unabashedly”.

This, the meeting as per observed, is being done to further divide the people so as to accomplish the agenda of “complete disempowerment” of the people of J-K and cautioned people to not fall prey and give in to such plans. People should collectively rise in unison to defeat such plans, the meeting observed.

The meeting further observed that “all the regions of J-K, apart from being robbed of their constitutional and democratic rights are slowly witnessing the catastrophic ramifications of the BJP-RSS plans in sectors like business, employment, right to natural resources etc. Initially, some people had fallen to the false narrative of “empowered Jammu” as a lam justification for all that the Government of India has been doing since 5 August 2019 but it is evident and accepted now that Jammu region is also paying a heavy price for the misadventures and nefarious acts of the BJP government,” the meeting observed.

“As a whole, the abject failure of the BJP government has given J-K the dubious distinction of having the highest unemployment rate in the country.”

Expressing anguish over the spree of recent arrests and initiation of action against students within and outside J-K, the PAC termed the government action as uncalled-for and resolved that the party would explore and extend all possible help, including legal, to the victims of such action.

The meeting also reiterated the party’s demand of immediate release of all political prisoners and speedy and impartial investigations into the cases of recent civilian killings. PAC also condemned the government’s arbitrary actions against employees including a recent spree of illegal terminations. The meeting also expressed grave concern over the deteriorating security situation and spike in violence levels. kdc