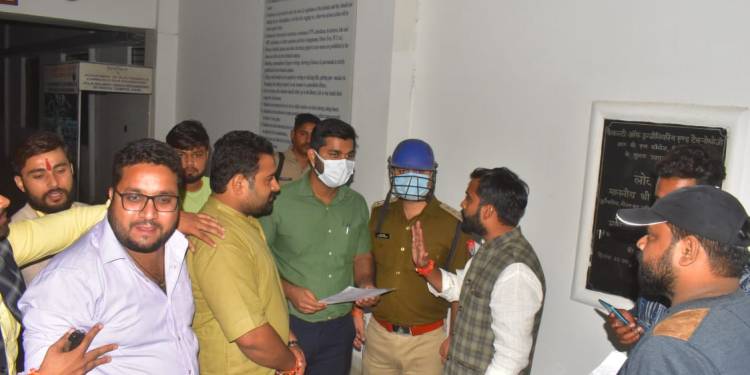 Srinagar, Oct 27: The Uttar Pradesh police has arrested three Kashmiri students for allegedly celebrating Pakistan cricket teams win against India in the T20 World cup after BJP workers filed a complaint against them in police.

According to reports the students are studying in Raja Balwant Singh (RBS) Engineering Technical Agra, and have been arrested today by the UP police from their hostel. The three students have been identified as Arshid Yusuf, Inayat Altaf Sheikh and Showkat Ahmed from Chadoora in Budgam and Bandipora districts.

Sources said that a police team from police station JagdishPura Agra arrived at the hostel of the college and arrested the trio under section 153A and 505 (1) (B).

Jammu and Kashmir Student Association president said that police in UP had confirmed to him that an FIR was filed against the three students.

The students have allegedly posted congratulatory messages for Pakistan as their Whatsapp status.

Earlier the BJP workers had protested at the college campus and filed a complaint against them with the police.

Thousands of Kashmiri students are studying in colleges outside in different states.

The incident of booking three Kashmiri students and arresting them has raised concern and fear among the students who are studying in outside colleges in different states.

The JK Students Association has urged the UP chief minister Yogi Adityanath to revoke FIR against the students.

J&K Students Association here today wrote to Uttar Pradesh Chief Minister Yogi Adityanath to drop an FIR against three Kashmiri students & revoke their suspension. In a Statement, National Spokesperson of Association Nasir Khuehami said that three kashmiri students pursuing civil Engineering in Raja Balwant Singh Engineering Technical Agra, uttar pradesh have been suspended by college authorities for uploading status in favour of pakistan after india pakistan match. All three students have been booked under FIR by police station JagdishPura agra, after a complaint was lodged against them for sharing posts related to it on social media.

“There is nothing wrong in cheering and Yelling for any team. It is the right of an individual to cheer for the sports team or player he/she likes the most and the arbitrary action of the College authorities and of the police against the Kashmiri students is totally unwarranted,” he said.

He said that, “FIR is a very harsh punishment for the act they did and “it will ruin their career and will further alienate them”. kdc